According to Politico's Jonathan Topaz and Kyle Cheney, when the Vermont Senator is asked about racial justice, he

addresses the problem head-on but typically pivots to his core message; namely, that economic policies favored by corporate interests sell out working people, many of whom are inner-city minorities. In an MSNBC interview during the Baltimore protests, Sanders called for body cameras for police and said he would address police brutality. “But the underlying issue,” he continued, “in terms of Freddie Gray’s community, as I understand it — do you know what the unemployment rate there is?”

That's what previously was referred to as addressing the underlying issues.  It's old hat now, evidently.

But that hasn't been enough- or maybe it has been the wrong thing.  Topaz/Cheney state that Sanders introduced into his stump speech this past week a passage definitively supporting a path to citizenship and President Obama's executive actions on immigration. He did so, however,

the same week that Illinois Rep. Luis Gutierrez, one of the most outspoken advocates of immigration reform in Congress, had harsh words for Sanders questioning his commitment to the issue. And they come amid several reports from progressive blogs and news outlets — including Daily Kos and Salon — that he hasn’t spoken out enough on racial justice issues, even when given a tailor-made opportunity at his campaign kickoff speech in Burlington, Vermont.

Let's give Representative Gutierrez his due.  It takes a lot of gall to snark about such a man "I don’t know if he likes immigrants, because he doesn’t seem to talk about immigrants. Sooner or later, he’ll tell us. I hope he likes immigrants."  It takes even more gall when the subject of your attack endorsed Jesus "Chuy" Garcia against the candidate you endorsed, "Mr. 1 percent," Rahm Emanuel. A few months before the election, in which Mayor Emanuel prevailed, Chicago-based journalist and instructor Kari Lydersen explained in In These Times

many regular Chicagoans see injustice, callousness and even cruelty in this trickle-down, authoritarian approach to city governance. They see the mayor bringing thousands of new corporate jobs subsidized with taxpayer dollars while laying off middle-class public sector workers like librarians, call-center staffers, crossing guards, and mental health clinic therapists. They see him closing neighborhood schools, throwing parents’ and students’ lives into turmoil. They see him (like Daley) passing ordinances at will through a rubber-stamp City Council, leaving citizens with few meaningful avenues to express their opposition to policies changing the face of their city.

One can hope that Gutierrez's cheap shot against the one presidential candidate- or potential presidential candidate- in either party to make economic injustice the focal point of his/her campaign was motivated solely by his support of Hillary Clinton's candidacy. But (avoiding the slime) Mr. Daily Kos, Marcos Moulitsas Huizenga, also criticized for lacking reference to immigration and criminal justice reform Sanders' speech launching his candidacy.

GOP leadership plans to bring back Trade Adjustment Assistance on Tuesday, in what will hopefully be their last opportunity to deliver fast-track (Trade Promotion Authority) to a President whom they oppose at every turn, except when given an opportunity to sink quality jobs.  If fast-track eventually passes, there will be much justified outrage by some observers on the left as they prattle on about the blow to the American consumer and middle-class jobs.


That's as it should be. But the reaction on the part of folks such as the loathsome Gutierrez and the influential Moulitsas to Bernie Sanders' emphasis on helping the poor and stabilizing the middle class suggests that isn't where attention is focused.  That is a pity because most Repubs- as their support for TPA and the Trans-Pacific Partnership indicate- keep their eyes on the prize:  satisfying the 1%.   Progressives know the stakes, and they may know the numbers, but some of them need to be reminded of this (from Economic Policy Institute): 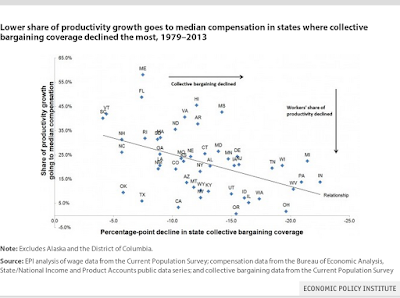 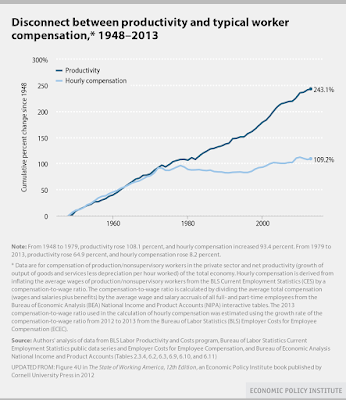