The Freedom To Choose Being Noble Or Dignified, Or Single

Score one for Associate Justice Antonin Scalia in his opinion concurring with that of Chief Justice Roberts, two of the four Justices on the losing side of the decision (photo by Alex Wong/Getty Images) striking down state bans on same-sex marriage. Scalia notes

The opinion is couched in a style that is as pretentious as its content is egotistic. If, even as the price to be paid for a fifth vote, I ever joined an opinion for the Court that began: ‘The Constitution promises liberty to all within its reach, a liberty that includes certain specific rights that allow persons, within a lawful realm, to define and express their identity,’ I would hide my head in a bag. The Supreme Court of the United States has descended from the disciplined legal reasoning of John Marshall and Joseph Story to the mystical aphorisms of the fortune cookie.

Anthony Kennedy, who penned the majority opinion (joined in by the four Democratic Justices), obviously has tenure but, if he stepped down at some point, will have a job assured promoting the Human Potential Movement. He'll never, however, will do any better than conflating legal reasoning with "express their identity."  Fellow Republican Caitlyn Jenner is bursting with pride.

But score two for Crooks and Liars' Juanita Jean. Without explanation or good reason, she labels Scalia's remark "crap."  Still, given the majority opinion in Bush v. Gore, she envisions Associate Justices Kagan, Sotomayor, and Ginsburg  having a good laugh at Scalia's argument that

No one, however, ever suggested that avoidance of hypocrisy, even on such a grand scale, is a qualification for  sitting on the United States Supreme Court.  So score not one, not two, but three or more for Justice Kennedy, who got all four liberal, free-thinking Justices to agree with him that

Neither Roberts (joined by Alito), Scalia or Thomas questions the fundamental right to marry, either as established by courts or by demonstrated importance to society through the ages.  (Scalia does, though, offer on page 8 of his dissent insights which have escaped his colleagues.)  Of course they don't. It's what conservatives long have believed and emphasized- the superiority of the married state to the unmarried state, even of married individuals to unmarried individuals.   Associate Justice Kennedy neatly summarized that concept in maintaining

From their beginning to their most recent page, the annals of human history reveal the transcendent importance of marriage. The lifelong union of a man and a woman always has promised nobility and dignity to all persons, without regard to their station in life. Marriage is sacred to those who live by their religions and offers unique fulfillment to those who find meaning in the secular realm. Its dynamic allows two people to find a life that could not be found alone, for a marriage becomes greater than just the two persons. Rising from the most basic human needs, marriage is essential to our most profound hopes and aspirations....

It's great to learn from one of the conservative  judges that traditional marriage promises "nobility and dignity" that  being single does not.  It's even more impressive that the four progressive Justices on the Court signed on to  that reasoning.  Sotomayor, Kagan, Ginsburg, even Breyer may be having a good laugh, along with a deep sense of satisfaction, today. But the biggest guffaw belongs to Anthony Kennedy, who has gotten them, and lay supporters  of same-sex marriage, to accept an antiquated concept  of marriage and the individual. 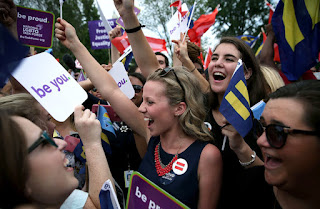