Based on 2010 statistics reflected in the graph below, Katie Leach-Lemon in 2014 observed "rates of homicides from guns were  6.6 times larger in the US than in Portugal, the country with one of the highest rates in Western Europe." 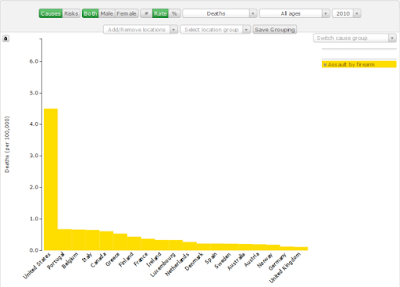 If you think that would be disconcerting to a supporter of the #black lives matter movement, you are thinking logically, but would be wrong.  Political science assistant professor Alex Gourevitch believes it "easy to see how" enactment of "feasible gun control laws"

will become part of the system of social control of mostly black, mostly poor people. There are already too many crimes, there is too much criminal law, and there is far too much incarceration — especially of black people. To the degree that all that is part of the “dark chapter in our history,” given the deep injustice of our society, and especially its policing practices, the actual practice of gun control will continue that dark chapter, not resolve it.

In 2013, after a review conducted by Vice President Biden following the Sandy Hook massacre, President Obama, the Huffington Post reported

recommended requiring criminal background checks for all gun sales; reinstating the assault weapons ban; restoring a 10-round limit on ammunition magazines; eliminating armor-piercing bullets; providing mental health services in schools; allocating funds to hire more police officers; and instituting a federal gun trafficking statute, among other policies. The cost of the package, senior officials estimated, would be roughly $500 million, some of which could come from already budgeted funds.

Of those seven proposals, five would come under the rubric of gun control, one other to law enforcement, though not a gun control measure.

Those five, which would marginally at most impinge upon the privileges and prerogatives of hunters and/or weapons collectors, presumably are the sort of thing Gurevitch would consider "feasible," rather than more radical, gun control.    (Gurevitch doesn't specify what laws he's talking about. If I were he, I wouldn't, either.)  So it is hard to understand why "gun control responses to mass killings"

are a deep mistake. The standard form of gun control means writing more criminal laws, creating new crimes, and therefore creating more criminals or more reasons for police to suspect people of crimes. More than that, it means creating yet more pretexts for a militarized police, full of racial and class prejudice, to overpolice.

The standard form of gun control means creating new crimes.  Well, yes, obviously.  If the proposals had been enacted, selling or purchasing an assault weapon or a weapon with a magazine greater than 10 rounds, or armor-piercing bullets would be a crime, as would being involved in a federal gun trafficking scheme.   That hardly seems racist, and cracking down on gun trafficking is hardly likely to affect minorities disproportionately.

Police may suspect more people of crimes if those individuals are illegally possessing firearms or ammunition.   Often (though Gurevitch seems to doubt it) such per persons are contemplating additional crimes- or at least have given themselves a greater capability of committing them, and for going undetected.

Unfortunately (though probably not for his argument), Gurevitch fails to tell us what he means by a "militarized police." To most individuals, "militarized police" refers to law enforcement with military weapons, such as bayonets, M-16 rifles, and armored personnel carriers (Ferguson from Google images, below). Nonetheless, Gurevitch conflates them which irregularly make an appearance with a situation "full of racial and class prejudice."

Neither are weapons in the hands of criminals, though they are there, leading to situations in which law enforcement reacts- sometimes overreacts- in a manner drawing comparisons to the military.   The prevalence of weapons in urban areas, so unconcerning to Gurevitch, is more- not less- likely to prompt the racist overreaction by police which understandably unnerves the professor. 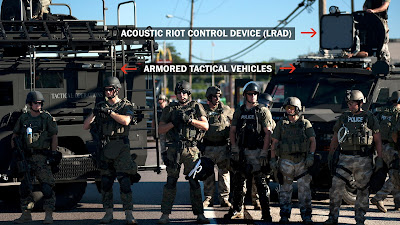 As multiple police killings of unarmed black men have reminded us, the police already operate with barely constrained force in poor, minority neighborhoods. From SWAT to stop-and-frisk to mass incarceration to parole monitoring, the police manage a panoply of programs that subject these populations to multiple layers of coercion and control. As a consequence, more than 7 million Americans are subject to some form of correctional control, an extremely disproportionate number of whom are poor and minority.

Police possess deadly weapons and are involved in law enforcement daily. The NAACP's Legal Defense Fund, hardly a hotbed of Klannish sentiment, has found there have been 76 "people of color" (colored people?) killed by police from 2/5/99 through 2014.  Awful, particularly for those families; also, 76 in 15+ years in a nation of 319 million people and 13,200,000 blacks.

Poor Blacks and Latinos are easily intimidated by charge-happy prosecutors into accepting plea deals, meaning they never see their day in court. Some even end up admitting to crimes they did not commit just to avoid the possibility of more severe punishments. More criminal gun laws would only feed this deeply unjust system.

This fellow really needs to get out more. He needs to observe the manner in which poor people of any race are treated in the criminal justice system.  Once he recognizes that poor whites also are abused, he may notice that even middle class folks admit responsibility for crimes they did not commit, in order to avoid serious punishment and going deeply into debt. Usually, only the rich can afford private legal counsel, without which one has little recourse but to plead guilty "just to avoid the possibility of more severe punishments."   Criminal gun laws often merit severe punishment if they're violated. The life of an innocent person may depend on it.

"Racial justice." Alex Gurevitch summarizes, "is a precondition for any reasonable gun control regime." No, it is not. Currently, we have neither, with one an important goal and the other an important means to an end, reduction in crime.  We also are nowhere near either. Most of those individuals abusing the Second Amendment are young men and, except in mass shootings, often black.  With their motives hardly benign and lifestyles short of exemplary, encouraging them to possess lethal weapons without legitimate cause is unlikely to spur white Americans to embrace that cause of racial justice Gourevitch emphasizes