There Is More To This Legacy 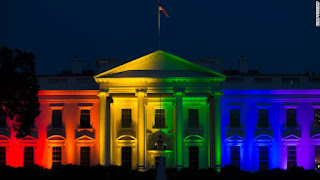 The far right’s Friday freakout has been a thing of beauty, even for those of us who generally avoid hate watching. Bryan Fischer’s 9/11 metaphor packed Twitter feedalone is worth microwaving a bag of Pop Secret for. But it’s Scalia who has now truly made his mark in the annals of history with a career defining meltdown. This, Antonin Scalia, is your legacy. A tantrum. A petulant declaration of sore loserhood. It’s what you’ll be forever remembered for. How fitting. How perfect. And for all their sting, how useless and hollow, how hilariously pointless, this beautiful day, your angry words prove to be.

"This, Antonin Scalia, is your legacy."  Surely, she jests.

One day after a famous decision, it is impossible to determine if it will be a Justice's legacy. However, last September, reviewing a book analyzing Justice Scalia, Justin Driver wrote

During the last decade alone, Scalia has issued major opinions redefining the Second Amendment’s protection for firearms possession in District of Columbia v. Heller and the Sixth Amendment’s Confrontation Clause in Crawford v. Washington. Even accounting for Scalia’s many memorable opinions written in dissent would inadequately trace his legal imprint.

Instead of his influence being confined to a discrete set of writings or narrow doctrinal categories, Scalia has shaped modern American law in ways more overarching and even elemental.

And that doesn't even count Bush v. Gore,  in which Scalia joined  in the per curiam decision, which plead "our consideration is limited to the present circumstances for the problem of equal protection in election processes generally presents many complexities." "For a time," Patrick Caldwell observed in 2013, "the justices got their wish. But the supposed one-time logic of the controversial decision has begun to gain acceptance in the legal community- particularly among campaign lawyers in contentious elections."

Whatever the enduring legal impact of the Court's decision aborting the recount of the 2000 presidential election and handing the presidency to George W. Bush (and the vice-presidency to Dick Cheney), the policy implications were- and continue to be- enormous.

And that hasn't been limited to Bush's war in Iraq, his ineffectual war on terrorism, or stability in the Middle East.   The year Bush left office, Ron Brownstein explained

the dubious distinction of becoming the only president in recent history to preside over an income decline through two presidential terms, notes Lawrence Mishel, president of the left-leaning Economic Policy Institute. The median household income increased during the two terms of Clinton (by 14 per cent, as we'll see in more detail below), Ronald Reagan (8.1 per cent), and Richard Nixon and Gerald Ford (3.9 per cent). As Mishel notes, although the global recession decidedly deepened the hole-the percentage decline in the median income from 2007 to 2008 is the largest single year fall on record-average families were already worse off in 2007 than they were in 2000, a remarkable result through an entire business expansion. "What is phenomenal about the years under Bush is that through the entire business cycle from 2000 through 2007, even before this recession...working families were worse off at the end of the recovery, in the best of times during that period, than they were in 2000 before he took office," Mishel says.

Bush's record on poverty is equally bleak. When Clinton left office in 2000, the Census counted almost 31.6 million Americans living in poverty. When Bush left office in 2008, the number of poor Americans had jumped to 39.8 million (the largest number in absolute terms since 1960.) Under Bush, the number of people in poverty increased by over 8.2 million, or 26.1 per cent. Over two-thirds of that increase occurred before the economic collapse of 2008.

These trends were not by accident, and the disaster that was Bush 43 should be laid at the feet of each Justice who decided that the U.S. Supreme Court should select the President who, if all votes had been counted, would have been Al Gore (with no Dick Cheney).

Those Justices included one Antonin G. Scalia, whom Williams believes will live in infamy because of his same-sex marriage dissent.

If you are a gay man or woman and believe your only path to happiness- or dignity, as Justice Kennedy emphasized- is through possession of a marriage license, rejoice.  If you are the White House and believe the home is  your personal property (above), rejoice.  If, however, you are dismayed at such trends in American society as the share of household income of the top .1%, (below, from Emanuel Saez), you'll notice that Antonin Scalia has done far worse to our nation. 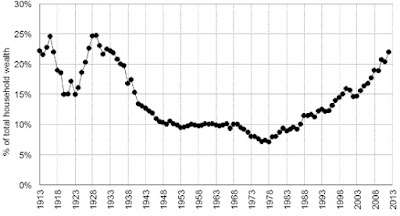