Pointing to Warren and Sanders’s shortcomings when it comes to racial politics doesn’t mean they’re evil, or they can’t learn to see things with a different frame. But they’re going to have to, or they’ll find that the populist energy that’s eclipsing Democratic Party centrists will be dissipated by racial tension no one can afford.

Walsh notes that in her article in Vox

Even as a student at the University of Chicago in the 1960s, influenced by the hours he spent in the library stacks reading famous philosophers, (Sanders) became frustrated with his fellow student activists, who were more interested in race or imperialism than the class struggle. They couldn’t see that everything they protested, he later said, was rooted in “an economic system in which the rich controls, to a large degree, the political and economic life of the country.”

Chris Hayes, observed Walsh, found that in Senator Sanders' announcement speech, he had spoken little of police violence and mass incarceration, to which Walsh remarks

These are the same questions I raised last month after watching Sen. Elizabeth Warren and New York Mayor Bill de Blasio hail the new progressive movement to combat income inequality at two Washington D.C. events. Both pointed to rising popular movements to demand economic justice, most notably the “Fight for $15” campaign. Neither mentioned the most vital and arguably most important movement of all, the “Black Lives Matter” crusade. (Which is odd, since “Fight for $15″ leaders have explicitly endorsed their sister movement.) And the agendas they endorsed that day made only minimal mention, if they mentioned it at all, of the role that mass incarceration and police abuse plays in worsening the plight of the African American poor.

To her credit, Walsh links mass incarceration and police abuse to the plight of the African-American poor, a welcome departure from the commentators, in print and especially broadcast, journalism, which link those criminal justice policies to African Americans, without differentiating between the affluent and the poor.

That understanding, ironically, underscores that Walsh's argument is wrong. There is a reason Sanders believes many social problems, including racial discrimination, stem from "an economic system in which the rich controls, to a large degree, the political and economic life of the country." It is because they do.

Recognizing that blacks were tragically left out, Walsh apparently has grown tired (though she ambiguously calls them "stirring") of Senator Warren's

stories about her upbringing: the days when her mother’s minimum wage job could support a family, when unions built the American middle class, and when Warren herself could attend a public university for almost nothing. Like a lot of white progressives, she points to the post World War II era as a kind of golden age when income inequality flattened and opportunity spread, the result of progressive action by government. I’ve written about the political lessons of that era repeatedly myself.

We know what happened next: far more blacks, though far fewer than desirable, ascended to the middle class.    We know, too, that as of the late 1970s, as Conor Lynch explains, "the top 0.1 percent in the United States owned 7 percent of household wealth; by 2012 their share had more than tripled to 22 percent. During this same period, the bottom 90 percent has gone from owning a high of 36.4 percent to a Great Depression low of 22.8 percent in 2012."  Barry Ritholtz reminds us "in 1968 the middle class received 53.2% of the nation's income. By 2010, that share had fallen to 46.5 percent" (graph from U.S. Census Bureau via Ritholtz). 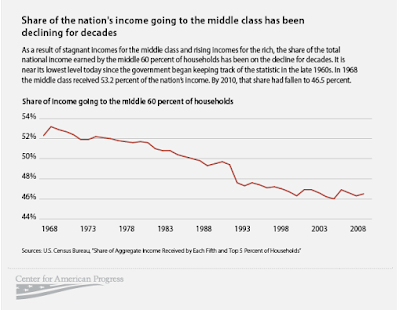 Recovery from the great recession has not curbed the inequity, given that since 2009, 95% of the financial growth has gone to the top 1% while in real terms the bottom 90% have lost income.

Emphasis on rectifying society's ills by eliminating ethnic discrimination has done only so much. Notwithstanding gains in income among blacks, wealth (hence, political power) has become increasingly concentrated in the hands of individuals- and families- at the very top. The number of blacks in this rarefied stratosphere is niggling.

The problem is not largely one of race, for minorities who have made it into the middle class are widely accepted by whites, often (sometimes superficially or patronizingly) even more so than their white peers.  The hurdles faces by African-Americans in society are predominantly ones of the black underclass, inadvertently demonstrated by the examples- mass incarceration and police abuse- cited by Walsh.

Those phenomena are played out daily in poor black communities. We hear nothing of the mass incarceration of blacks residing in affluent communities. Similarly,when we hear of police abuse, real or merely alleged, it's typically in such places as Cleveland, Staten Island, Ferguson, Baltimore, or other areas in which large numbers of poor black people reside.  They (and to a lesser extent, most of the rest of us) are victimized by increasing domination of wealth, and of the wealthy.

That is the sort of thing Bernard Sanders and Elizabeth Warren are talking about.  "Increasingly," Walsh argues, "black and other scholars are showing us that racial disadvantage won't be undone without paying attention to, and talking about, race."   Surely, it won't be completely undone without addressing race, which we were doing long before George Zimmerman killed Trayvon Brown.  (And while we are talking about race more now, no more progress has been made.)  But whatever good is accomplished directly addressing race pales in comparison to that which would be accomplished by talking about class and economic disadvantage.

Walsh and others can continue to consider the impact of race. Now, fortunately, we have at least a couple of elected officials boldly addressing economic disadvantage, a subject hitherto generally ignored by the political class.