We'll Hear From Her Once It Doesn't Matter


Campaign manager Robby Mook of Hillary for America was interviewed Sunday on CBS' Face the Nation by John Dickerson, who asked him why his candidate "was on the sidelines" during the recent fight over Trade Adjustment Assistance and Trade Promotion Authority, precursors to the Trans-Pacific Partnership (coverage map of the pact, below, from the AFL-CIO).  (Has been on the sidelines would have been more accurate. Regrettably, it's not over till the fat lady sings.)   Unfortunately, he responded

Well, Hillary not been (sic) on the sidelines.

Let me say, first and foremost, speaking of a fighter, there will no tougher fighter at the negotiating table for everyday Americans when these trade agreements are being negotiated. So, families can trust her to fight hard for them in any of these agreements.

Well, Robby, Hillary has been on the sidelines.  Among the issues Mrs. Clinton addressed in her speech (news report below) at Roosevelt Island yesterday were health, including reproductive; immigration, "gay people," small business, college debt, legal services for poor people; equal pay for women; energy policy (even sustainability); rebuilding the nation's infrastructure; preschool education; cybersecurity; campaign financing; nuclear proliferation. In fact, she mentioned nearly everything except Deflategate. And trade (or copyright and patent protection, generously provided in the TPP).

But Hillary has been abundantly clear about where she stands on the issue of trade. She laid out three key principles and tests that any trade agreement needs to meet. First and foremost, it needs to protect American jobs. Second, it needs in to increase wages for workers here in the United States, and, third, it needs to be consistent with our national security interests.

Mook has learned well the first rule of manipulating an interview: talk, talk, and confuse. One might be able to surmise Clinton's perspective if she had a priority; instead she has three "key principles and tests," which may not point in the same direction.  The Administration's rationale for keeping the text of the Trans-Pacific Partnership secret is national security. Among Clinton's "principles and tests." Trade documents- even our own- are "foreign government information," claims the office of the United States Trade Representative.

Moreover, President Obama contends the TPP will increase jobs, even as he supports Trade Adjustment Assistance (which went down to defeat Thursday, thus temporarily derailing fast track) so that workers who lose their jobs may get retrained.  The notion that employment will increase with this agreement (when retraining is promoted) is fairly far-fetched, but that doesn't prevent supporters from floating it.  The three principles and tests criteria is useless except to sound thoughtful while avoiding taking a stand.

Mook adds "We're waiting on- there's obviously a trade bill that may be coming. We don't have the exact text, but when we do, she will take a clear position."

But the more disturbing implication is that Mrs. Clinton won't take a position because "we don't have the exact text." News flash: the Executive branch is keeping the text secret- much of what is known has been gleaned from leaked drafts- precisely because it fears that knowledge would doom it to defeat.   Surely Mrs. Clinton and Mr. Mook know that the "trade" deal itself has not yet reached the floor of either chamber, but TPA/fast track has, and approval of that would assure approval of the international agreement.

The TPP can still be approved if TPA is rejected. But if TPA (fast track) is approved, TPP still has life. Therefore, if Clinton is uncertain, or wishes to maintain an open mind, about the pact, there is no reason not to oppose fast track. If that goes down to defeat, she can still advocate the concept of free trade as well as the pact itself, suggesting improvement for labor and/or the environment.

"We don't have the exact text yet" so HRC can't take a position.  But she still could take a position- against fast track and for allowing Congress to insert labor and environmental standards.  But she has not. The lack of transparency, Senator Sanders noted on FTN, "is one of many reasons to be voting against this piece of legislation." And it, is, as he argued, "a little bit silly for members of Congress to be voting yes on a bill that they haven't seen."

Lincoln Chafee has taken a position (the wrong one) on TPP.  Martin O'Malley has taken a position (the right ones) on TPP and on fast track.  Bernie Sanders has emphasized his opposition to both. Hillary Clinton won't say, until (it would seem) she can finesse the issue, avoiding offending either the base of her party or the Big Money Boyz and the Obamots, the latter never questioning anything Barack O. does.   Or as Robbie Mook puts it, "no tougher fighter." 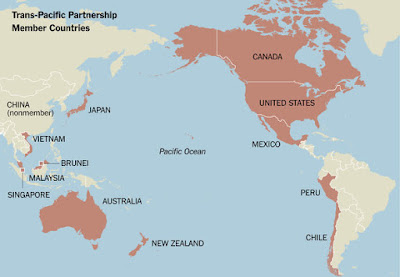