Social media often brings out the worst in people. In this case, it was Facebook.  The Lubbock (Texas) Avalanche-Journal reports

A Frenship teacher said she apologized after writing a Facebook post saying she was “almost to the point” of wanting segregation regarding a racially charged police issue in McKinney.

Karen Fitzgibbons, a teacher at Bennett Elementary School, told A-J Media she deleted the post Wednesday evening — a day after writing the publicly viewable post on her Facebook page.

Asked about the post, a Frenship ISD spokesman said such matters are “taken very seriously.”

Fitzgibbons started the post by saying a McKinney police officer’s resignation after a dispute at a swimming pool made her angry and that the officer should not have to resign.

“I’m going to just go ahead and say it ... the blacks are the ones causing the problems and this ‘racial tension.’ I guess that’s what happens when you flunk out of school and have no education. I’m sure their parents are just as guilty for not knowing what their kids were doing; or knew it and didn’t care. I’m almost to the point of wanting hem all segregated on one side of town so they can hurt each other and leave the innocent people alone. Maybe the 50s and 60s were really on to something. Now, let the bashing of my true and honest opinion begin....GO! #imnotracist #imsickofthemcausingtrouble #itwasatagedcommunity,” the Facebook post stated.

Fitzgibbons insisted the post “was not directed at any one person or group.”

“It was not an educational post; it was a personal experience post,” Fitzgibbons said, adding she has a personal connection to the McKinney situation, but declined to elaborate.

She added: “I apologized to the appropriate people,” declining to identify those people.

With the post deleted and her apology made, the teacher said she hopes the issue is resolved.

Presented with the post, Andy Penney, director of public relations and information at Frenship Independent School District, said in an email all FISD employees are subject to local policies defining employee standards of conduct and electronic media practices.

Frenship’s policy states that employees will be held to the same professional standards in their public use of electronic media as they are for any other public conduct. The policy specifically mentions social networking sites Facebook, MySpace, Twitter and LinkedIn.

“If an employee’s use of electronic media interferes with the employee’s ability to effectively perform his or her job duties, the employee is subject to disciplinary action, up to and including termination of employment,” the policy states.

“Matters such as this are taken very seriously regarding our employees’ social media use,” he said. “That’s the whole reason we have policies and procedures in place.”

He confirmed Fitzgibbons remained a fourth-grade teacher at the elementary as of Wednesday but declined to comment further on her status or possible action by the district, citing personnel issues.

Fitzgibbons’ FISD profile page states she has worked 20 years in education, including 16 for Frenship.

Good luck making it to the 21st year.  It's never a good sign when you acknowledge awaiting "the bashing of my true and honest opinions."   It's not an open invitation, but an acknowledgement that what you've just written or said is outside the arena of standard discourse.

Another bad sign is when you must plead "I'm no racist."  And "I'm sick of them causing trouble" can be misinterpreted; perhaps worse, interpreted accurately.

Fitzgibbons' remarks (photo from KCBD-TV via Salon) may have violated the policies and procedures of the school district, and her continued employment there is dubious.  The First Amendment, regrettably, does not apply to the employee-employer relationship and "if an employee's use of electronic media interferes with the employee's ability to effectively perform his or her job duties" is not only a split infinitive, but so broad it could apply to almost anything.

A bizarre, perhaps revolutionary, thought: the teacher's continued employment should depend on whether she is performing adequately.   It's not inconceivable that someone with awful opinions and terrible public relations skills can put aside her prejudices and perform satisfactorily, even in a manner clearly contrary to her own sentiments.

"The Jews are all over the government," President Nixon once complained. Moreover, Washington, D.C. is "full of Jews" and critical agencies needed to be run by someone "who is not Jewish," especially because "most Jews are disloyal." Yet, his Administration was very supportive of Israel, albeit in part because of his national security adviser and Secretary  of State, Henry Kissinger, himself Jewish.   Dick Nixon did not like Jews but that did not stop him from employing Kissinger, Leonard Garment, and William Safire, and- far more importantly- coming to the aid of the Jewish state when needed.

When the new school year comes around, Karen Fitzgibbons and Bennett Elementary School probably will have parted ways, which might prove to be the best for everyone around.  If so, once again the 21st century principle that what one says is more important than what one does will have prevailed. 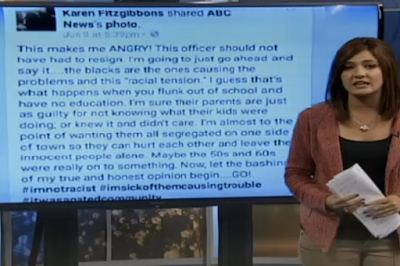