the media owes him an apology over the Bridgegate scandal.

“I do believe there's an absolute bias and a rush to judgment. You all know this, you saw the coverage of me 15 months ago. I was guilty, I had done it,” Christie said on CNBC Thursday morning. “Now we're 15 months later, where are the apologies pouring in? Not one thing I said the day after the bridge situation has been proven wrong.”

Christie has not been implicated for any role in the closing of several lanes on the George Washington Bridge in September of 2013 which caused major traffic delays. Christie’s former high-school classmate and Port Authority official David Wildstein pleaded guilty earlier this month to conspiracy counts related to the lane closures and prosecutors have also indicted fellow Christie allies Bill Baroni, the former deputy executive director of the Port Authority, and Bridget Anne Kelly, the governor’s former deputy chief of staff.

Whoa! Slow down, big  guy. The opera ain't over till the fat lady sings, and she's not even warming up.  Baruch College history professor and follower of New Jersey politics Brian Murphy writes

Last week, Bridget Anne Kelly’s attorney, Michael Critchley, filed a request with the presiding judge to be given the power to subpoena Gibson, Dunn, & Crutcher. That’s the law firm Christie hired last January – at public expense – to investigate his administration and produce the so-called “Mastro Report” that exonerated him from any culpability in both Bridgegate and allegations leveled against him by the Mayor of Hoboken relating to Hurricane Sandy relief aid.

Critchley wants to look at the work product - interview transcripts, notes, and so forth - to see what people actually said and whether they square with the final report. Only one problem: Gibson Dunn told Critchley those notes and other work product don't exist.

This is not a mere technical glitch inasmuch as

According to the manual for outside counsel that’s put together by the N.J. Attorney General’s office, “outside counsel shall” – not may or might, but shall – “retain pleadings, correspondence, discovery materials, deposition transcripts and similar documents and work product for a period of no less than seven years.”

Whatever it is- incompetence, malfeasance, or dishonesty- it doesn't come cheap.  Murphy continues

Would that be a big deal? Yes. Yes it would. It would be a big deal for a number of reasons but the most immediate would be that Christie hired Gibson Dunn on the State of New Jersey's dime.
The Mastro Report, which didn’t look or read like or conform to the standards of a conventional GAO-style investigative document, cost more than $3.5 million in taxpayer funds by the time it was released in March 2014. The firm billed the state more than $1 million during its first three weeks’ of work, then more than $2 million in February, causing a minor panic in the Christie administration as they saw a looming public relations disaster. The solution was to negotiate the firm’s hourly rate down from $650 an hour to $350 an hour.

But the work never ended.

So far, Gibson Dunn has been paid more than $7.75 million by the state of New Jersey to represent Christie and members of his administration in Bridgegate and related investigations. The vast majority of that money has been spent on the federal investigation led by U.S. Attorney for New Jersey Paul Fishman.

Gibson Dunn billed the state $53,824 in April, $37,731 in March, and $106,325 in February of this year. These fees cover witness interviews and document production – reviewing and handing over documents to prosecutors and investigators in response to subpoenas and less formal requests. A fuller picture of the nature of the firm’s work is obscured, however, by heavy redactions made by the New Jersey Attorney General’s office to the firm’s bills before they’re disclosed to the public each month, always late on Friday afternoons.

During the legislative hearings that were held last spring and summer, several witnesses who’d been interviewed by Gibson Dunn told state lawmakers, under oath, that the Mastro Report mischaracterized what they recalled telling Gibson Dunn attorneys. Some even objected to conclusions drawn in the Report.

The hits keep coming. In a civil case separate from the federal criminal prosecution, Kate Zernike of The New York Times reports, Wildstein has given testimony portraying Christie "casually revealing information about a grand jury proceeding he had overseen, which violates federal law."

Perhaps Chris Christie will survive this scandal, just as he has well over a thousand prisoners escaping under his watch from private halfway houses run by a company which he has ties with; tax incentives of $261 million to Revel casino, which has gone belly-up; lying about the costs of, and cancelling, a train tunnel which would have been subsidized by the federal government and given the state a major economic boost; using Hurricane Sandy funds for a political slush fund; reckless fiscal policies resulting in downgrade of credit three times by each of three credit agencies; reneging on a promise- and violating the law in so doing- to make pension payments to state workers (below, AP photo/Mel Evans).   And there is more.  It goes on and on for a governor whose actions make it difficult to distinguish between managerial incompetence and extraordinary dishonesty. 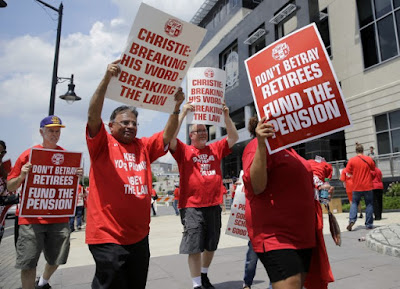