Another Chance To Stand Up

ALL HANDS ON DECK. This is not a drill. The vote in the House of Representatives on fast track trade authority, preapproving the Trans-Pacific Partnership (TPP) before the public finds out what is in it, is coming up very soon. It is even possible it could happen later this week. The Senate has already passed fast track; if the House passes this it goes to President Obama and he will sign it. That will make TPP a done deal.

The moment is almost at hand for a vote in the lower chamber on Trade Promotion Authority.  If it passes there (having already passed the Senate), President Obama will sign the legislation, and approval of the Trans-Pacific Partnership itself will not be far behind.

And still, the presumptive Democratic presidential nominee remains silent. She may, if and when TPA/fast-track is approved, come out against the TPP. By then it wouldn't really matter, though it might serve to reassure some supporters that she is not irredeemable.    If Clinton doesn't make that mere symbolic gesture, it is likely she was offered the position of Secretary of State in return for a promise not to oppose any of the White House's initiatives.

Still, Mrs. Clinton can speak up and make a difference- but on a different issue, one on which she has long been associated: women's rights. Think Progress' Tara Culp-Pressler writes

Looming questions about exactly how far states can go to restrict access to abortion services are inching closer to the Supreme Court, as the nation’s most powerful justices are currently deciding whether to take up a case regarding a Mississippi law that threatens to close the only abortion clinic in the entire state.

The law in question requires abortion doctors in Mississippi to obtain admitting privileges from local hospitals, a complicated bureaucratic arrangement that is difficult for physicians to comply with. The doctors who fly in from out of state to provide abortions at Mississippi’s only clinic have not been able to obtain privileges — which means that, if the law is allowed to take effect, the clinic will be forced to close. 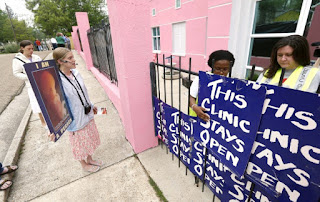 The Fifth Circuit Court had ruled against the statute, but the High Court took the case upon appeal by the State of Mississippi, which is claiming an interest in womens' health.

Nonetheless, the purpose of the Mississippi legislation, a type of TRAP law (table from Guttmacher Institute; click here to see it), is not in question. A few months after passage of the law- aimed at the Jackson Womens' Health Organization (photo above credited to AP /Rogelio V. Solis)- three years ago, Governor Phil Bryant admitted "my goal of course is to shut it down." A board member of Pro-Life Mississippi has bragged “These incremental laws are part of a greater strategy to end abortion in our country. It’s part of it, and one day, our country will be abortion free.” 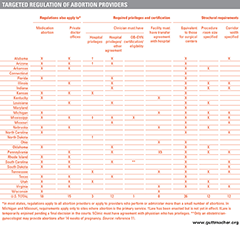 It's a naive boast, of course, because as long as there are unwanted pregnancies (generally looked upon with favor by the pro-life community), there will be abortions, numerous and often dangerous.

But it is a defiant boast. Mrs. Clinton's husband once promised to work toward making abortion "safe, legal, and rare."  The pro-life movement aims to make abortions- legal abortions, that is- less common and more rare by establishing all manner of roadblocks.

Hillary Clinton has chosen to speak out for the reform of the criminal justice system and the immigration system, neither of which has many (if any) defenders.  Due to fealty to corporate interests or to President Obama, or afford the next president maximum flexibility, she has chosen not to stand in the way of international agreements which will harm the American worker and the American consumer.

Mrs. Clinton has, however, spoken out in the past (at times less critical) in favor of reproductive freedom.  If she doesn't find her voice on this issue, there is little reason to doubt that she is bereft of interest in any cause but her own.