In return for getting precious little, the negotiators oppose Iran at the table gave up the one thing the mullahs really feared – a continuing squeeze on Tehran’s dwindling bank account.

But David Rothkopf, who urges the USA "to work very closely with the Saudis, the Gulf states, and the Israelis in defining the terms of an Iran deal they can live with" (photo from Reuters) nonetheless concedes

For the hawks to suggest that the deal freezing Iranian uranium-enrichment efforts above the 5 percent level, halting work on the heavy-water reactor near Arak, and granting daily inspections to Iran's centrifuge-laden facilities at Natanz and Fordow makes matters more dangerous in the short term is just indefensible on its face. Absent such a deal, all enrichment and technological advancement efforts would continue unabated and without inspections. Iran would almost certainly move more quickly toward having a bomb without this deal than with it. 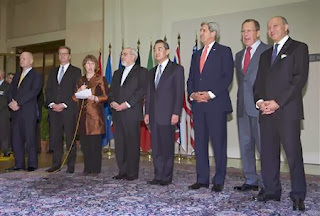 Carafano, however, cannot be dissuaded from uninformed cynicism. He remarks "Our White House likes this deal. But, our White House also thinks its policies in Iraq, Libya, Egypt, and Syria have been just super."

Three years ago, Carafano was more generous toward Obama because "To be frank some Obama programs have started to look like Bush clones - because they work and are necessary. Keeping GITMO open; staying the course in Afghanistan and Iraq; and fighting global terrorism.."  Now, the President is criticized for his policy toward Iraq, Libya, Egypt, and Syria.

A few months ago, President Obama faced the choice of condoning chemical weapons use by the despot in Damascus or launching missile strikes, which may have proven ineffective while plunging the United States into its fourth war in the region in ten years.  He might have moved against Syria, possibly destablilizing the regim, and giving an opening to Al Qaeda, or turning a blind eye to Bashir Al Assad's mass murder. The President instead grasped an opportunity to enter negotiations.  Simply insane, I tell you.

Thankfully, American forces have been withdrawn from the quagmire in Iraq but Carafano views Obama's policy as a failure.  He should look elsewhere.   Dafna Linzer on the MSNBC website explains

The sad truth of Sunday’s nuclear agreement with Iran is that it could have come 10 years earlier and with far fewer costs.

It took a Mideast war, an accelerating nuclear program, a crisis with U.N. inspectors and crippling sanctions before the sides started talking.

More importantly, it was the election of President Obama and the return of the reformist leadership in Tehran that made an historic deal between the United States and Iran even possible.

For Obama, the possibility of peacefully ending 30 years of hostilities between the two nations - and the threat posed by the uncertainty of Iran’s nuclear program - has been a sought-after goal since his first moments as the 44th president of the United States.

His 2009 inaugural address made those ambitions clear even as Iran was governed by the hostile leadership of former President Mahmoud Ahmadinejad.

“To those who cling to power through corruption and deceit and the silencing of dissent, know that you are on the wrong side of history; but that we will extend a hand if you are willing to unclench your fist,” Obama said in the opening hour of his presidency.

Though he never wavered from that sentiment, Obama had little room to run without a partner on the other side. That finally came this year, when Hassan Rouhani was elected as Iran’s president, returning to the world stage with committed reformists who had long sought to heal wounds with the West.

Chief among the key players is his foreign minister, Javad Zarif, an architect of Sunday’s deal and one of the best known Iranian figures in Washington. This wasn’t Zarif’s first attempt at reconciliation on behalf of the Persian people. But like Obama, he too lacked a partner when he first tried to reach out more than a decade ago.

That was before there was an operating plutonium plant in the town of Arak, enriched uranium at underground facility in Natanz or an Iranian leadership bent on vilifying Israel and inflaming world ire.

When the United States was attacked by Al-Qaeda on Sept. 11, 2001, it was by a terrorist organization that was no friend to Iran.

Acting from inside Afghanistan and Pakistan - two nations that border Iran - al-Qaeda’s actions destabilized the region and brought on a swift counterattack by U.S. forces who remain in the region.

Hundreds of al-Qaeda members streamed across Iran’s borders. Many were caught and identified. The most dangerous, including Osama bin Laden’s relatives, were imprisoned. Low-level fighters were returned to their home countries - but not before Zarif secretly shared their identities, finger prints, passports and other information with the U.S. government.

There was other quiet but vital cooperation along the Iranian-Afghan border to stop al-Qaeda,  the heroin trade and warlords from smuggling weapons and goods out of Afghanistan.

The Bush administration benefited greatly from all of it but that’s not the impression it conveyed to the American public or the Iranian people.

Iran’s leaders, working through a Swiss diplomatic channel, sent the State Department a lengthy proposal for embarking on negotiations. Tehran’s leaders sought a “grand bargain,” with everything on the table, including restoring relations with Israel, and giving up any interest in pursing nuclear capabilities that could be used for weapons.

If only they had been greeted with silence. Instead, Bush used his 2003 State of the Union address to enlist Iran into what he deemed an “axis of evil,” along with Iraq and North Korea.

Within two months, operating on his doctrine of preemption, Bush invaded Iraq and had troops on two of Iran’s major borders. His stable of neo-conservative advisers made no secret of their conviction that Iraq was a “demonstration effect,” meant to weaken and pressure Iran.

It had the opposite effect. With Saddam Hussein and the Taliban removed from power, Iran’s influence in the region only grew, particularly in Iraq where U.S. troops struggled with a violent insurgency that eventually claimed the lives of more than 4,000 American troops.

And when an Iranian dissident group revealed a small but secret nuclear effort underfoot at Natanz in Iran, Iran moved quickly to fortify and defend it on the world stage. Years of concealment and obfuscation on the part of Iran defined a bitter relationship with U.N. inspectors who only gathered more evidence that pointed tot he desire for a nuclear weapons program.

Bush was reelected in 2004, defeating John Kerry - who would wait nine years to become the Secretary of State who negotiated Sunday’s deal on behalf of the United States.

In those intervening years, Bush told Iranians in 2005 to stay home on election day rather than exercise one of the few political rights available. In the wake of low turn out, and lower expectations, Ahmadinejad became president, ushering in eight years of open hostility.

There have been cyber attacks and proxy wars; terrorism at the hands of Hezbollah - an Iranian ally and surrogate - and dead scientists in the intervening 10 years. Israel, with its own right-wing leadership and internal politics, has fueled tensions, even harming its own relationship with the Obama administration in an unsuccessful effort to keep up pressure on Iran.

When Zarif’s team first proposed a deal in 2003, Iran had not yet mastered the ability to enrich uranium - the key fuel for a nuclear bomb - to dangerous levels.

Sunday’s deal seeks to roll those gains back and lock down the program into a safe and verifiable place. In exchange, Iran hopes for a phased way back into the global economy - with modern airplane parts and access to long-frozen financial assets.

George W. Bush deserves compassion. How awkward it must have been, in those days when the Administration was considering launching a war against Iraq, to have had Baghdad's primary adversary offer the U.S.A. an olive branch.  How inconvenient it was to ignore an opportunity to end Iran's nuclear ambitions, provide greater security to the USA's only reliable ally (Israel)  in the region, and possiblyestablish a bulwark against the Hussein regime.

The preferred option became war, of which the only benefit has been replacement of an anti-Tehran, anti-Al Qaeda dictator with a regime supportive of Iran, the nation the right is condemning President Obama for negotiating with.

If that seems to make no sense, it's because it doesn't. But George W. Bush was re-elected and if his supporters, such as James Carafano, can whitewash recent history and blame President Obama for the disastrous consequences brought on by his predecessor, all the better.