Doing It The Neo-Liberal Way

Steve M. reviews those perceived failures which at one time or another has been cited as Obama's "Katrina"  (New Orleans Superdome, from time.com) or that it should be, or that it could be.  They are, in the order he presented them: 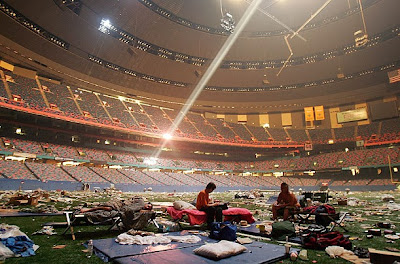 Digby, who like S.M. is thus unimpressed that the Obamacare rollout is the newest Katrina, comments

The reason Bush was tarred with his Katrina response is because he acted like he didn't give a damn. And it came out of a long series of problems in Iraq and after revelations that his administration had blown off warnings about 9/11. People can say a lot of things about the Obamacare rollout but I don't think anyone can say that the president doesn't give a damn and isn't trying to fix the problems.

But of course the media (under the influence of Republican ref-working) will try to tag him with his own Katrina. As you can see, they've been trying since he came into office. Just as they spent decades trying to find a Democratic Watergate --- and finally just created one out of whole cloth with Whitewater --- they will try to even out Bush's debacle. The media always wants to be above partisanship and tries desperately to find ways to prove they aren't. They called Bush out on Katrina and so feel compelled to find a corollary with Obama.They'll keep doing it until something sticks --- or he is out of office. But don't kid yourself. Some Democrat, whether Obama or a successor, will have to pay a price for Bush's incompetence. It's in the Village bylaws.

But what S.M. finds most egregious is labeling as "Obama's Katrina" an alleged failure of Senator Obama (before B.O. was even elected president).  Mickey Kaus had written

A friend emails: "Obama's KATRINA. A little dramatic?"  Maybe.  Obama's record on "affordable housing," as described in the Globe story, isn't a case of gross ineptitude in a catastrophic regional emergency. It's not even a symbol of endemic governmental dysfunction. (Although: Is there a bigger Petri dish for corrupt incompetence than the "public-private partnership"? Think cable TV franchises.) But the Globe account does seem to capture what's most likely to be wrong with an Obama administration.  After all, Obama's career has been unusually limited for a presidential contender. Housing and "community development" has been a big part of it.

Housing and community development would not be, could not be, a failure of the Administration on a par with flooding in Nebraska (or Georgia or Kentucky or anywhere).  Nor would public-private partnership ever be cited as a "Petri dish for corrupt incompetence."

But it should be, with a test case of public-private partnership playing out before our eyes. On Thursday, the President conceded "There is no doubt that our failure to roll out the ACA smoothly has put a burden on Democrats, whether they're running or not, because they stood up and supported this effort through thick and thin and, you know, I feel deeply responsible for making it harder for them rather than easier for them."  (Not so responsible, however, that he bothered to support Barbara Buono, Chris Christie's opponent.) The President unequivocally declared  "we fumbled the rollout of this health care law."

The Administration did do a lousy job presenting it its health care website, though initial difficulties with tech rollouts are not unprecedented.  But while it is responsible for coordination of the players involved in healthcare.gov, it was unnecessary for Obama to hold the federal government fully accountable.  Back in mid-October, Wonkblog's Lydia DePillis wrote

Over the past few weeks, if you've been paying attention at all to the unfolding disaster of people trying and failing to sign up for Obamacare online, one name keeps coming up: CGI Federal, the IT contractor that has orchestrated most of the Healthcare.gov Web site. By most accounts, it's been a complete train wreck, for reasons both technical and bureaucratic.

Good of her to notice- few journalists have-not been coming up.  And neither has the media bothered to explain the role of the private sector in partnering with the public sector in what is has been perceived as a wholly governmental screw-up. Ask 100 Americans who created and maintains the website and a vast majority will finger Obama, the federal government, the government, the Democrats, or the like.  Few realize that government contractors- the private sector- have created and maintained the website.
but the name CGI has

Barack Obama plans to keep it that way. Keeping the American people in the dark has been a hallmark of his Administration and there is little reason to reverse course now, especially when it would entail casting doubt on corporate America.  Further,

CGI Federal Inc, the company that created large parts of the error-plagued ObamaCare exchange website, which it says it is scrambling to fix, has recently been awarded several other government contracts.

Since the ObamaCare exchange website launched on Oct. 1, government officials have signed at least five different agreements with CGI totaling $7 million, according to USASpending.gov, a government website that lists government contracts. The contracts were for computer and software development at the Department of Health and Human Services, the Department of Commerce, and the Environmental Protection Agency.

One contract, for instance, was signed Oct. 19 by Department of Commerce officials that gives CGI Federal $266,164 to provide "IT and Telecom Systems Development" for the Patent Office.

The public-private partnership, as applied to housing, health care, or anything else, has not become Obama's "Katrina" and the deaths of 1,000+ Americans cannot be attributed to it.    But as Kaus notes

The Obama administration has pioneered a new path to corporatism : Screw up a government initiative so much you have to call in the big boys from the industry to fix it. … You think the White House owes the large insurers now that they’ve dispatched their experts to save healthcare.gov? It’s easy to think of dozens of situations in the next three years–assuming Obamacare survives–where Obama’s regulators will have to choose between more competition and cozier big-firm oligopolies. The first benefits consumers. The second benefits insurance company profits.

The government is calling in the big boys from the industry to fix what the industry fouled up.  The Affordable Care Act will survive, embedded forever as an initiative of a Democratic administration.  But the circumstances under which it will are uncertain, and the collaboration between the public and the private sectors has played a major, largely unexamined, role.