In April, 2007, political scientists Thomas Mann and Norm Ornstein, authors of It's Even Worse than it Looks- How the American Constitution and System Collided with the New Politics of Extemism, observed

The GOP has become an insurgent outlier in American politics. It is ideologically extreme; scornful of compromise; unmoved by conventional understanding of facts, evidence and science; and dismissive of the legitimacy of its political opposition.

When one party moves this far from the mainstream, it makes it nearly impossible for the political system to deal constructively with the country’s challenges.

“Both sides do it” or “There is plenty of blame to go around” are the traditional refuges for an American news media intent on proving its lack of bias, while political scientists prefer generality and neutrality when discussing partisan polarization. Many self-styled bipartisan groups, in their search for common ground, propose solutions that move both sides to the center, a strategy that is simply untenable when one side is so far out of reach.

It is clear that the center of gravity in the Republican Party has shifted sharply to the right. Its once-legendary moderate and center-right legislators in the House and the Senate — think Bob Michel, Mickey Edwards, John Danforth, Chuck Hagel — are virtually extinct.

The post-McGovern Democratic Party, by contrast, while losing the bulk of its conservative Dixiecrat contingent in the decades after the civil rights revolution, has retained a more diverse base. Since the Clinton presidency, it has hewed to the center-left on issues from welfare reform to fiscal policy. While the Democrats may have moved from their 40-yard line to their 25, the Republicans have gone from their 40 to somewhere behind their goal post.

Political scientists Christopher Hare, Nolan McCarty, Keith T. Poole and Howard Rosenthal have compared roll-call votes among Democrats and Republicans from 1879-2011 and  determined Democrats have moved slightly left while Republicans have moved dramatically right since 1976.  While contending that both parties bear blame for the coarsening political climate in Washington, they caution "we should be careful not to equate the two parties’ roles in contemporary political polarization: the data are clear that this is a Republican-led phenomenon where very conservative Republicans have replaced moderate Republicans and Southern Democrats."

Julian Zelizer found "since 2007,the Senate Historical Office has shown, Democrats have had to end Republican filibusters more than 360 times, a historic record."   The video below puts the whole thing into perspective:


Republican obstructionism reached its apex earlier this autumn when, as Paul Krugman put it at the time, "a substantial number of Republicans believe that they can force President Obama to cancel health reform by threatening a government shutdown, a debt default, or both" because "Republican leaders who know better are afraid to level with the party's delusional wing."  It's hard to believe they were unaware

... hitting the ceiling would force a huge, immediate spending cut, almost surely pushing America back into recession. Beyond that, failure to raise the ceiling would mean missed payments on existing U.S. government debt. And that might have terrifying consequences.

Why? Financial markets have long treated U.S. bonds as the ultimate safe asset; the assumption that America will always honor its debts is the bedrock on which the world financial system rests. In particular, Treasury bills — short-term U.S. bonds — are what investors demand when they want absolutely solid collateral against loans. Treasury bills are so essential for this role that in times of severe stress they sometimes pay slightly negative interest rates — that is, they’re treated as being better than cash.

Now suppose it became clear that U.S. bonds weren’t safe, that America couldn’t be counted on to honor its debts after all. Suddenly, the whole system would be disrupted. Maybe, if we were lucky, financial institutions would quickly cobble together alternative arrangements. But it looks quite possible that default would create a huge financial crisis, dwarfing the crisis set off by the failure of Lehman Brothers five years ago.

But as earnestly as some Repubs tried to wreck the economy, GOP intransigence is no more absurd than with presidential nominees (chart below- from statistics compiled by People for the American Way- from Senate Democrats via Senate Minority Leader McConnell's office via Chris Cillizza.  Whew.)  Facing three vacancies on the D.C. Circuit Court, President Obama has nominated three individuals- each receiving the highest rating from the American Bar Association- and each is being denied an up-or-down vote by the Senate minority.  The obstructionism is not motivated by a concern that any might be unqualified nor even because of ideology, but on the basis of a slick, but extraordinarily facile and transparent, rationalization. 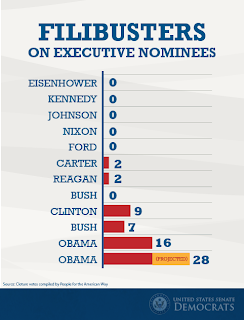 Aside from the most recent incident(s), this is old news, though news largely lost in the mainstream media's "on the one hand, and on the other" meme.   The irony, of course, is that the failure to recognize that one party and one party alone is responsible for gridlock is itself the crassest form of partisanship.  And if there is one spectacularly crass figure in American politics, it is the media's darling, its favorite to become the 45th president of the United States, the governor of New Jersey.    Talking Points Memo reports

Christie blamed Obama, saying the President "has not developed the relationships that are necessary on a personal level on both sides of the aisle," according to ABC News.

No, it's not because the actors don't have a beer together, or because of Washington, or because of both parties.   It stems from Republicans wanting to bring down a president who wants nothing as much as to get agreement somewhere in the middle between the party he represents and the party which is trying to bring him down.

Chris Christie will win further plaudits from a mainstream media desperate to latch onto a Republican who is not Rand Paul or Ted Cruz.  But Christie's everyone is to blame lament is not only trite and increasingly tiresome but, like the man himself, dishonest.