The Weekly Standard's Chris Lowry, who has not seen starbursts since he first cast eyes upon Sarah Palin on television, writes of the mainstream media's favorite politician

In his victory speech, Christie spoke of being “one of you.” As Henry Olsen writes, Christie’s potential is in matching that Everyman appeal with substance. He could set out to make himself a Republican by and for the middle class in a substantive and stylistic departure for the contemporary party.

Congratulations on the big win, governor. Now show us what’s next.

Opining in Time- whose current cover features Christie as "the elephant in the room"-  MSNBC's Joe Scarborough is even more excited. He compares the governor to Dwight Eisenhower and Saint Reagan and suggests "that the gruff-talking Jersey boy may not be a beauty, but in the words of the Boss, he may just be all right."

Rachel Maddow, on a campaign against Kentucky Senator Rand Paul, ought to contemplate the enthusiasm of the likes of Lowry and Scarborough. Politico reports

Rachel Maddow says Sen. Rand Paul is “melting down” in the face of plagiarism accusations against him.

The MSNBC host, who was the first to report on instances of plagiarism in Paul’s speeches last week before multiple media outlets uncovered other examples, read on her show Wednesday night scathing editorials criticizing the Kentucky Republican in his home-state newspapers.

“The terrible hometown press that Rand Paul is getting right now might explain why the senator is melting down over this issue,” Maddow said. “Now he’s come to the point where he is threatening to quit and leave politics altogether unless people stop criticizing him over his plagiarism problems and reporting on them.”

Maddow read from interviews that Paul gave to The New York Times (which she called “exasperated, emotional, sweary”) and National Review, in which he discussed going back to being a doctor if necessary and asked if he would have to “be in detention” for the rest of his career.

“One thing that is maybe under-appreciated about this stressful episode for Sen. Paul is that it is happening for him at a key time in his career,” Maddow said, mentioning POLITICO’s report that Paul met with News Corp Chairman Rupert Murdoch and Fox News chief Roger Ailes. “Obviously two of the kingmakers you need on your side if you’re a Republican running for president. … This is the time when these guys are trying to establish themselves as viable candidates.”

But in the face of that pressure, Maddow said, the possible 2016 presidential candidate is cracking.

“Paul is all but breaking down in these interviews,” Maddow said. “Not only can he apparently not handle the rigors of the difficult workload of being a freshman senator, which was his excuse for plagiarizing an article for an op-ed, not only can he not handle the workload of being a senator, he apparently can’t handle criticism of things he’s has done wrong. … If this is the way he handles pressure, that is probably a good thing to know about him now.”

For the people of Kentucky- who will probably re-elect him as long as he runs- it "is probably a good thing to know about him now."   For the rest of us, aside from voters in a GOP caucus or primary in Iowa or New Hampshire, it really doesn't matter.  Even before Rachel Maddow's researchers found that Senator Paul had plagiarized from Wikipedia passages about something called Gattica, Paul had about as much chance of being the Repub presidential nominee as Billy Paul or Les Paul, and Les has been deceased for four years.

Christie, though, has some supporters far more significant that Scarborough or (the more restrained) Lowry.   He has been able to attract big money from Wall Street, Hollywood, and Silicon Valley, enamored as they are of his tough guy swagger and corporatist allegiance.   He does have a legitimate shot at the Repub presidential nomination, though less than the media believes and far less than it wishes.  That gives him a better chance than Rand Paul, who at a Senate hearing on Wednesday noted

Some of these ads, people running for office put their mug all over these ads while they're in the middle of a political campaign. In New Jersey, $25 million was spent on ads that included somebody running for political office. I'm thinking there might be a conflict of interest there. That's a real problem.

And that should be a real problem for Rachel Maddow, the star-struck Chris Matthews, and the other pundits who can't get enough of this guy, immediately below (story further below): 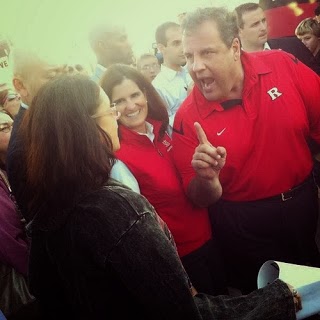