You know it's not an election year when you read

U.S. Education Secretary Arne Duncan told a group of state schools superintendents Friday that he found it “fascinating” that some of the opposition to the Common Core State Standards has come from “white suburban moms who — all of a sudden — their child isn’t as brilliant as they thought they were, and their school isn’t quite as good as they thought they were.”

Those "white suburban moms" are coveted in election years, but not so much when an advocate of privatizing public education chooses them as a target.  In some contexts, invoking race- as in white suburban moms- is a fireable offense, though apparently not when the cause is one near and dear to the the heart of the private sector and, one suspects, the "socialist" Barack Obama.

Ethnic stereotyping aside, Duncan's characterization fails to meet the test of accuracy.  Bob Somerby picks up on Diane Ravitch arguing

But that won't do.  The rationale, raison d'etre, and pretext of the education reform (i.e., for profit) movement is that public schools and their teachers are failing children.  The numbers don't bear it out; neither does the reality that socio-economic status has an enormous impact upon educational achievement. Significant also are related factors, including a large immigrant population handicapped by a language barrier and the legacy of a political system determined for generations to keep one race of people ill-educated.

It is comforting for neo-liberals to imagine, and push on the community, the idea that vouchers here, a charter school there, an end to teacher tenure over here will turn around an educational system the "reformers" are determined to convince the public is failing.  Rather, in his state, Jersey Jazzman observes (graph, below), approximately 2/3 of the discrepancy in proficiency rates across schools can be attributed to the variation in free/reduced school lunch, one indicator of relative affluence. 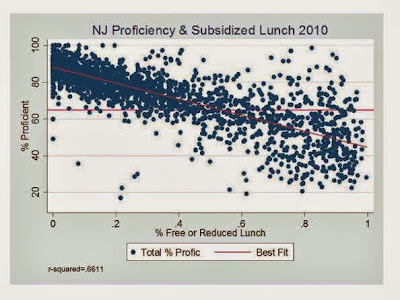 But the "free market"- which increasingly demands government preference and favoritism- cannot be denied. Ravitch explains the Ocean Charter school was given by the Los Angeles Unified School District

an iPad for every student, whether they want it or not.  After all, they will need the iPads for Common Core testing. Curiously, the devices cost $768 each, more than the retail price.

The iPad giveaway is a pilot run on the district's $1 billion planned purchase.

The part that puzzles me most is the cost. If the cost for Los Angeles alone is $1 billion, what will be the cost for the nation?  $50 billion? $100 billion? No wonder the big tech corporations are thrilled with the Common Core. And since the devices and the content will be obsolete in three years, how many more billions will leave America's classrooms to pay for new technology?