There are two kinds (at least) of same-sex marriage opponents in the Republican Party.  And Chris Christie is no Liz Cheney, an underdog candidate for the GOP nomination for senator in Wyoming.  A slightly snide Paul Waldman of the American Prospect recognizes

But if we assume that Liz Cheney always opposed marriage equality, we have to give her some credit for a certain kind of consistency. Back in March, when Republican senator Rob Portman came out in support of same-sex marriage, announcing that he had a change of heart after learning his son is gay, I and other people gave him some criticism for only deciding that discrimination was bad once it turned out someone he loved was among the class being discriminated against. Part of being a good person (and a good politician) should be having the ability to care about people's welfare even if you don't know them.

Dick Cheney, Waldman is careful not to note, is in the Rob Portman class, appearing to support same-sex marriage because his daughter Mary, a veteran Repub activist, is gay and married. But we should give the sister of Mary Cheney (who is betrothed to Heather Poe) the benefit of the doubt and assume she was sincere when she recently stated gay marriage is "just an area where we disagree."  Mary responded by posting on her Facebook page  “Liz — this isn’t just an issue on which we disagree you’re just wrong — and on the wrong side of history.”   Getting into a pis_ _ _ _ match with a member of one's family- especially when the father agrees with his other daughter- is never wise politics, but a risk Liz Cheney was willing to take.

The New Jersey governor, however, is a politician of a different animal.  Steve Kornacki (openly gay and a strong supporter of same-sex marriage), who boasts of being a long-time follower of New Jersey politics and ought to know better, stated Sunday "My take on Christie is like, honest to God, if you gave him the truth serum, if you're sitting here having a conversation off the record, he doesn't care.  He's fine with gay marriage."  Yes, and if you asked every House Republican under the influence of a truth serum what what he or she believes about risking default on the national debt because of their beef with Obamacare, most of them would assure you they don't want to blow up the economy.

But as Susan Page said during the discussion with Kornacki, "There`s no way this Republican Party is nominating a presidential nominee in 2016 who supports the idea of gay marriage. And I`m sure Chris Christie is aware of that."  There may be a nod and a wink involved, but Christie will remain officially opposed to same-sex marriage because Chris Christie is (in a manner foreign to Liz Cheney) is what Chris Christie is about.  As two New York Times reporters wrote late last month, the governor

has long tried to walk a fine line on same-sex marriage, which polls show is popular in his home state, but opposed by conservative voters in important primary states. Last year, he vetoed legislation allowing same-sex marriage, saying voters should decide the issue in a referendum. As recently as last week, he repeated his position that he believed marriage to be between a man and a woman. But he also signed a bill outlawing so-called gay conversion therapy, which angered conservatives.

The governor held out against same-sex marriage until it was no longer convenient for him to do so, when the issue would have dragged on, eroding his numbers in New Jersey.  And the boast that he won big in a Democratic state (and remains popular there) is critical to the message he will bring to Republican primary voters and the media.  That also helps explain why the University of Delaware alumnus and sometime opponent of gay marriage (photo from the Daily Princetonian) is, a la Rudy Giuliani, on board with cross-dressing: 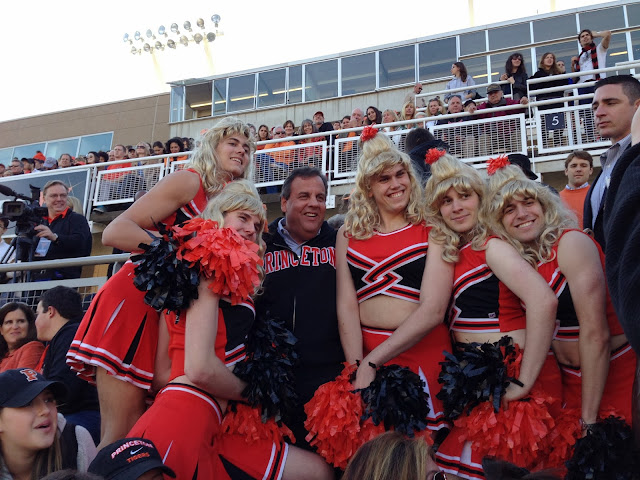 Principles, apparently, are for losing Senate candidates in Wyoming, not for someone who plans to be president.