The Spirit Of The First Amendment


In a speech to the Faith and Freedom conference, Sarah Palin went one of those places no one should go when, slamming government debt and the war on Christmas, she remarked

This free stuff, so seductive. Why do you think marketers use free stuff to bring people in? Free stuff is such a strong marketing ploy. But didn't you all learn too in Econ 101 there ain't no such thing as a free lunch? Our free stuff today is being paid for by taking money from our children and borrowing from China. When that note comes due -- and this isn't racist.. but it's going to be like slavery when that note is due. We are going to be beholden to a foreign master. Because there is no plan coming out of Washington, D.C. to stop the incurrence of debt."

She shouldn't have gone "slavery."  It's not "like slavery" and it's not slavery.

Only slavery is slavery. And only Nazi Germany was Nazi Germany, a lesson others should have learned. According to deadline.com, an October 16 broadcast of Jimmy Kimmel Live

featured Kimmel asking a group of precocious well-dressed kids about this and that, including how to spell Barack Obama. Kids Table segments routinely feature Kimmel getting unscripted responses from kids to issues of the day. Big question of that day: how to repay the $1.3 trillion the U.S. owes China. “Kill everyone in China,” giggled a little boy named Braxton...

...another little boy, Braydon, suggested the United States should handle the $1.3 trillion debt by building a huge wall around China “so they can’t come to us.”

“Should this country be forced to pay our own debts?” Kimmel asked the table. “Yes!” the tots responded enthusiastically.  Same response when Kimmel asked them, “should we allow the Chinese people to live” – excepting Braxton. “If we don’t allow them to live, then they will try to kill us!” little Eva warned Braxton. “We’re going to all be killed,” weighed in Allie. “Well, this has been an interesting edition of Kids Table – the Lord of the Flies edition,” Kimmel concluded.

Reaction was swift from two quarters in response to Braxton's remark "kill everyone in China."  The website four days later reported the Chinese Foreign Ministry had told

ABC it needs to “face its mistakes head on and respond with a sincere attitude to the reasonable demands by Chinese in America and prevent a similar incident from occurring again.” Sacking Jimmy Kimmel is a demand made by some Chinese protesters – about 750 to 1,000 strong, depending on your source – who gathered outside ABC’s Burbank headquarters over the weekend.

ABC apologized twice and stated it would do

“everything in our power to ensure that the segment receives no further exposure,” editing the skit out of any future broadcast of that episode and taking down the clip from all of its online platforms. In the wake of the reaction to the sketch, Kimmel apologized on-air, in writing, and met with protesters. Today Xinhau News Agency reported, simultaneously, in headlines that “American broadcaster urged to acknowledge misconduct,” in the Kimmel affair, and “ABC confirms to Xinhua it apologized for offensive talk show skit.”

But that was not all.  A petition posted online gained 100,000 signatures within 30 days, which triggers a response (forthcoming) from the White House.  The petition claims “The program is totally unacceptable and it must be cut. A sincere apology must be issued. It is extremely distasteful and this is the same rhetoric used in Nazi Germany against Jewish people.”

"It makes sense," points out Alyssa Rosenberg of Think Progress, for ABC- which is owned by Disney- to "(make) sure its audience has access to as many of its projects as possible," especially because

Despite a loosening of the restrictions that allow a limited number of foreign films into the Chinese market, rules that are meant to give a boost to the Chinese film industry and to prevent some kind of content from reaching Chinese audiences, American films can still be denied access to Chinese theaters at the last moment. American studios looking to avoid quota restrictions and ease their films’ arrivals into China still have to navigate a complicated co-production process to bring on Chinese partners.

Restrictions on cultural freedom are a relatively minor manifestation of the oppression in mainland China, a totalitarian state whose leaders routinely imprison political opponents. It's not surprising that Disney would bow and scrape to the butchers in Beijing when gobs of money are at stake.

The online petition, however, is a disgrace of a different sort.  It alleges "the same rhetoric used in Nazi Germany against Jewish people,"  a charge both ludicrous and appalling to be made against a six-year-old child.  "Kill everyone in China" is an innocent remark made by someone too young to realize that the Chinese people themselves should not be held responsible for the dangerous regime which controls their lives.

But the petitioners are no more motivated by sympathy for the victims of Beijing than is the network responsible for the comment of a child, nor the child himself for the off-hand remark. While the First Amendment is not at issue- the United States government is not cracking down on ABC- freedom of expression has been targeted, both by a foreign government and by petitioners. And though it is no irony that Beijing has attacked the network for allowing a child to express his views, it is ironic that individuals circulating a petition would do so to deny the expression of political views by other(s).

They would do so, evidently, by equating a remark- uttered innocently by a young child- to Nazi rhetoric, a component of the murder of six million Jews (and, additionally, non-Jews).     That is logically, and morally, outrageous.   We already knew that Sarah Palin, who believes there is some connection between the national debt and slavery, is little more than an attention-seeking demagogue.  The people who demand ABC grovel at their feet for airing what it simplistically labels a "racist program" are little more than anti-democratic, authoritarian thugs.  They should heed the words of the White House when, responding to a petition demanding the deportation of Piers Morgan for his comments on gun control, it stated

... the constitution not only guarantees an individual right to bear arms, but also enshrines the freedom of speech and the freedom of the press-fundamental principles that are essential to our democracy... Americans may disagree on matters of public policy and express those disagreements vigorously, but no one should be punished by the government simply because he or she expressed a view on the Second amendment- or any other matter of public concern. 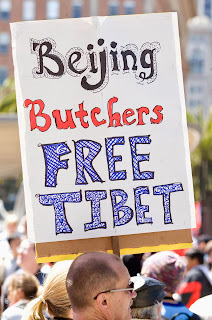