Clinton convinced himself that the only way to govern in the aftermath of Reaganism was through the noxious politics of “triangulation,” which produced welfare reform, “don’t ask, don’t tell” and the enormous neoliberal, job-exporting scams of GATT and NAFTA. We can debate the reasons for the relative prosperity of the Clinton years (no overseas wars to fight), but Clinton was every bit as much a Wall Street president as George W. Bush, helped drive the stock-market and real estate boom that would later turn toxic, and on most substantive policy questions found himself to the right of every 20th-century Republican president not named Ronald Reagan.

Democratic apologists may be correct that the party has done the best it could to adapt to screwy circumstances, and that no Democrat could have been elected president since the Reagan revolution if the party hadn’t shifted right in pursuit of soccer moms, Silicon Valley entrepreneurs and (just for instance) insurance executives. But the result is that one of our only two political parties – and don’t start talking about third parties, because that’s not happening in my lifetime or yours — possesses no clear convictions, beyond the desire to be slightly less obnoxious than the other one.

The last two Democratic presidents- both of whom were elected to a second term- possess few clear convictions, particularly on anything of substance, as reflected by President Obama's triangulation, which is at least somewhat analogous to President Obama's obsession with bipartisanship.

But there is something upon which there is near unanimity among Democratic politicians, pundits, and other heavy hitters.   As of early April, there were a mere seven (7) Democratic Senators who had not come out in favor of same-sex marriage, and among them were three who maintained simply that the issue should be decided at the state level (the worst possible outcome, by the way).   And we learn

Illinois is now the 16th state to allow same-sex marriage.

Gov. Pat Quinn signed a bill into law Wednesday in Chicago that makes the state the largest in the Midwest to legalize gay weddings. The law takes effect in June when county clerks can begin issuing marriage licenses to same-sex couples.

Wages and salaries equaled just 42.6 percent of the economy in the April-June quarter, near a record low set in 2011.

More than 8.5 million jobs were lost in the recession and its aftermath, leaving workforces leaner and more productive. Corporate revenue rose as the economy recovered.

But workers haven’t benefited much. With unemployment still high, they’ve had little leverage to demand higher pay. Many have been happy just to have a job.

Being employed no longer precludes poverty. Many of those employees  (presumably) happy merely to have a job work at America's largest employer, in which

An advocacy group called Organization United for Respect is chastising Walmart for setting out storage containers to collect donations for employees who can't afford a Thanksgiving dinner.

The Web page and Facebook page of the group feature a photo of two storage containers underneath a sign that says, "Please donate food items here so Associates in Need can enjoy Thanksgiving dinner."

The same dynamic applies at McDonald's, which underpays its workers while providing what the company refers to as "food."  In July, it compiled with Visa a sample budget(chart, below) for its typical worker, which condescendingly demonstrated that most of its employees cannot subsist on their pay from the fast food restaurant.  The Atlantic's Jordan Weissman explained

This hypothetical worker doesn't pay a heating bill. I guess some utilities are included in their $600 a month rent? (At the end of 2012, average rent in the U.S. was $1,048). Gas and groceries are bundled into $27 a day spending money. And this individual apparently has access to $20 a month healthcare. McDonald's, for its part, charges employees $12.58 a week for the company's most basic health plan. Well, that's if they've been with the company for a year. Otherwise, it's $14.

The bottom line for corporations has been exceptional and growing, aided by the proliferation of paid and unpaid internships, which have nearly replaced the full-time, entry-level paid full time position for recent college graduates.  That is only one of many reasons that earlier this year, corporate profits per dollar of sales hit an all-time high (a) while wages as a share of GDP hit an all-time low (b), as the graphs below from the St. Louis Fed (by way of Business Insider) indicate. 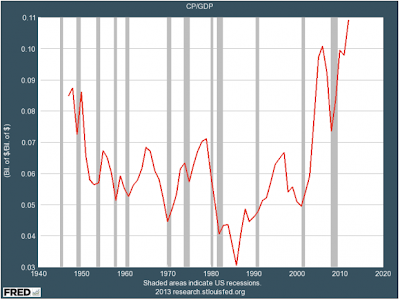 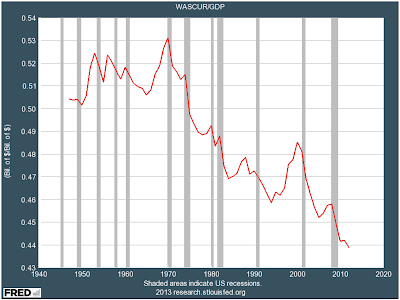 The New Republic's Timothy Noah has observed "In the United States, economic mobility is lower than it was during the late nineteenth and early twentieth centuries; it is no longer accelerating, as it was during the ’50s and ’60s; and it is either about the same or a little lower than it was in 1970.  Nor does the United States of America remain the star of upward mobility it once was, for

Life expectancy at birth in America is now a year shorter than the average of 34 modern countries, while in 1970 it was a year longer, a detailed report just released by the Organization for Economic Cooperation and Development shows...

The quality of life for older people in countries where people live longer is also generally better, the OECD report shows, which means more happiness and less cost.

So why is America falling behind?

Because, the report says, the U.S. has a “highly fragmented” health care system, millions eat a poor diet and some use illegal drugs. It also noted the effects of “adverse socio-economic conditions” caused by worsening poverty and increasing income inequality. 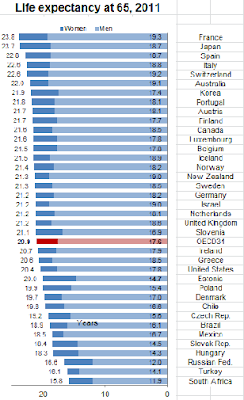 There is also another factor, though less important than economic factors particularly harmful to the less affluent: a health care system, inadequate nutrition, use of addictive drugs, and income inequality. Johnston adds "America also has a higher murder rate than most of the modern world, which primarily affects young people’s life expectancy."

The American dream of a stable and growing middle class has all but vanished.  Leave all that aside; pay no attention to that man behind the curtain (video for entertainment purposes only).  Instead, let's join Democratic politicians and the establishment pundity as they all whoop and holler.  DOMA has fallen, Proposition 8 has been overturned in California, and in Idaho on November 8, according to the L.A. Times

...  four couples filed a lawsuit in U.S. District Court seeking the right to same-sex marriage. The lawsuit covers those who were married elsewhere and want their nuptials to be legally recognized, as well as those seeking to wed.

“Like many other couples with a lifelong commitment, the unmarried plaintiffs are spouses in every sense, except that Idaho law will not allow them to marry,” according to the complaint, emailed to reporters. “In fact, under Idaho law, solemnization of their commitment without a marriage license is a crime.”

Surely, utopia is just around the corner.