So Happy, So Proud


"Go ahead- make my day", said Clint Eastwood in Sudden Impact.  On day 20 of his campaign to reassure extreme conservatives he hates President Obama as much as they do

"This is just an awful law. It made no sense and that's why I didn't get into a state exchange. And no, I have absolutely no regrets. In fact, I’m really glad that the train wreck’s not mine; it’s his," Christie told listeners on New Jersey 101.5FM, referring to President Barack Obama.

Nothing could have made Chris Christie's day more than the problems encountered by the federal exchange that the governor opted for over a state-run exchange.  He's not disappointed that so few people have been able to compete the application to secure health care insurance. Instead, he is glad that Barack Obama, and not he, is identified with the "train wreck" which thus far has denied health care to all but a few New Jerseyans.

If Governor Christie were interested in the health of his state's residents, he might have set up a state exchange and thereby joined the three Democratic governors who recently took to the op-ed page of The Washington Post to explain why the health care exchanges set up in their states thus far have been an unqualified success.

In our states — Washington, Kentucky and Connecticut — the Affordable Care Act, or “Obamacare,” is working. Tens of thousands of our residents have enrolled in affordable health-care coverage. Many of them could not get insurance before the law was enacted.

People keep asking us why our states have been successful. Here’s a hint: It’s not about our Web sites.

Sure, having functioning Web sites for our health-care exchanges makes the job of meeting the enormous demand for affordable coverage much easier, but each of our state Web sites has had its share of technical glitches. As we have demonstrated on a near-daily basis, Web sites can continually be improved to meet consumers’ needs.

The Affordable Care Act has been successful in our states because our political and community leaders grasped the importance of expanding health-care coverage and have avoided the temptation to use health-care reform as a political football.

In Washington, the legislature authorized Medicaid expansion with overwhelmingly bipartisan votes in the House and Senate this summer because legislators understood that it could help create more than 10,000 jobs, save more than $300 million for the state in the first 18 months, and, most important, provide several hundred thousand uninsured Washingtonians with health coverage.

In Kentucky, two independent studies showed that the Bluegrass State couldn’t afford not to expand Medicaid. Expansion offered huge savings in the state budget and is expected to create 17,000 jobs.

In Connecticut, more than 50 percent of enrollment in the state exchange, Access Health CT, is for private health insurance. The Connecticut exchange has a customer satisfaction level of 96.5 percent, according to a survey of users in October, with more than 82 percent of enrollees either “extremely likely” or “very likely” to recommend the exchange to a colleague or friend.

In our states, elected leaders have decided to put people, not politics, first.

The numbers are trickling in, though a few states have not released data yet.  But the chart below places New Jersey second from the bottom among the 46 states reporting in completion rate of an application for health insurance. 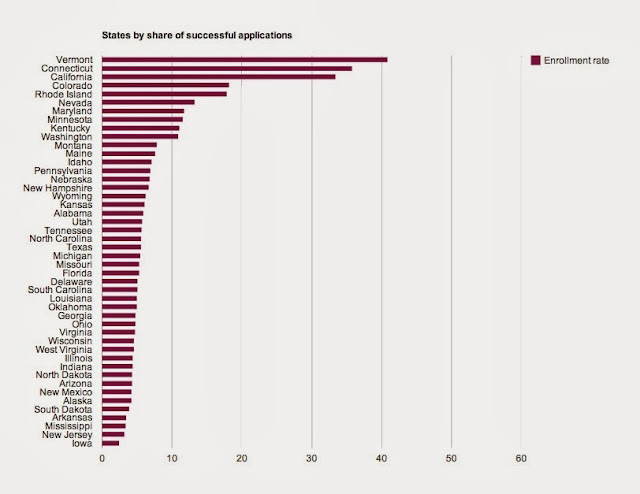 Barack Obama, a de facto supporter of a governor who finds birth control, pap smears, and breast cancer screening extraneous, remains a little bit of an enigma.  But for Chris Christie, Republican all-but-declared candidate for president, it's all about "me, me, me."