Dealing with the long-term unemployed and the minimum wage only barely scratches the surface of the conversation on income inequality. It's a conversation to which the comfortable asset classes would like to limit the conversation, because it allows them to wedge the middle class against the poor, when the real divide is between the 1% and 99%.

There is probably no Senate Democrat who more clearly belongs to "the comfortable asset classes" than the darling of Wall Street, Chuck Schumer. Nonetheless, other neo-liberals and/or centrists, including Barack Obama, have joined the bandwagon to extend unemployment compensation and increase the minimum wage. They recognize the growing disaster of long-term unemployment as well as their party's ongoing commitment to helping the poor, the truly destitute. But Atkins realizes

The treatment of the poor and unemployed isn't where the economic progressive line is drawn. Ensuring that the most vulnerable are well taken care of in society is a bare minimum standard. The energy behind the cause of income inequality is about increasing the negotiating power of workers across the spectrum while disincentivizing the hollowing out and rent-seeking of the economy by the parasitic asset classes. Progressive action on income inequality is about expanding Social Security, reinvesting in pensions, eliminating student loan debt, raising the capital gains tax, instituting a financial transaction tax, reinstating Glass Steagall, expanding labor unions, enhancing worker protections, and a host of similar issues designed to maximize middle class negotiating power.

That about covers it, though Atkins, a supporter of comprehensive immigration reform, hasn't noticed the impact of unrestricted illegal immigration in lowering the wage rate and undermining worker protections. (Immediately making illegal immigrants citizens upon legalization would reduce that effect. Don't hold your breath.)  The 7th and 8th factors cited by Atkins have been on display in Seattle, Washington- and not favorably.   The New Republic's Alec MacGillis writes

In November, by a 2-1 margin, unionized Boeing machinists in Washington state voted down a contract proposal from the company that included freezing their pensions in favor of less generous and riskier 401(k) plans, increasing their out-of-pocket health spending and limiting raises to just 4 percent over the contract's eight-year term. Boeing promptly threatened to move the assembly of its new 777X aircraft to a state with anti-union right-to-work laws, and received no shortage of offers of states eager to provide incentives and bargain-basement labor. Boeing offered the Puget Sound workers a slightly revised contract that reversed a proposed change in the length of time it would take workers to achieve the top wage, but kept the most objectionable elements, including the pension freeze. Boeing’s hard line could hardly be justified by hard times: it is enjoying huge profits and a record $400 billion backlog in orders and two weeks ago raised its dividend by some 50 percent and signed off on a $10 billion stock buyback.

Local leaders of the International Association of Machinists recommended the 31,000 unionized employees reject membership the awful contract, while the union's national leadership  recommended approval because, MacGillis believes, it did not want to lose the $25 million in union dues.

The revised contract was very narrowly approved and MacGillis explained

So Boeing will put the 777X assembly in the Puget Sound, pocketing $8.7 billion in new tax incentives from Washington state, saving untold millions in labor costs as a result of the new deal and establishing yet another major marker on the graph that has seen workers’ share of corporate gains steadily eroding. Who’s to say what the right vote was for the workers and the Seattle area, given the company’s threats—the Seattle Times couldn’t even bring itself to make a judgment in its milquetoast editorial on the matter. But this chapter should serve as a wake-up call to Obama, Bill de Blasio and other Democrats intent on doing something to reverse rising inequality, stagnating wages and falling economic mobility. The speeches are fine and good, and some solutions are straightforward, such as pushing for a higher minimum wage.

But to really address the underlying trends will also mean taking on the more fundamental forces that lead to an outcome like we just saw in the Puget Sound: strengthening labor laws and unions in right-to-work states to weaken employers' race-to-the-bottom threats to move south; raising taxes on upper incomes and capital gains to slightly rebalance the equation between the McNernys of the world and their flush investors on the one hand and their overmatched workers on the other; and, perhaps most difficult of all, changing the norms for acceptable behavior by corporate titans, even if they've been named to the presidential exports council.

If you have a particularly good memory, that name might sound familiar.  On March 11, 2010 the Seattle Post-Intelligencer reported

“Jim and Ursula are tremendously talented and experienced, and I am grateful that they have chosen to serve in these important roles as we work to strengthen our economy and create good jobs by boosting our exports,” Obama said in a news release. “I look forward to working with them in the weeks and months ahead.”

So one of Barack Obama's favorites, Jim McNerny, gets a 16% increase to nearly $23 million in gross compensation and threatens to move jobs out of state to coerce the union into accepting a contract substituting a defined contribution pension plan for a defined benefits plan and cutting workers' health benefits.

President Obama cannot by himself end the downslide of unions and workers- hence middle class incomes (graph, below) engineered over three decades by Ronald(6) Wilson(6) Reagan(6). But the federal government employs by far the greatest number of individuals earning under $24,000 per year (roughly 2,000,000) of whom 500,000 are contract employees. It's too much to expect this President to end this travesty through Executive Order. But it should not be too much for him to acknowledge, as Atkins notes

Obviously, raising the minimum wage and extending unemployment benefits are crucial not only to those affected but also to the broader economy. But even this misses the point. Income inequality isn't just about the poor and those who are most vulnerable. It's about the broad middle class, too, and the fact that the top 1% have hollowed it out. 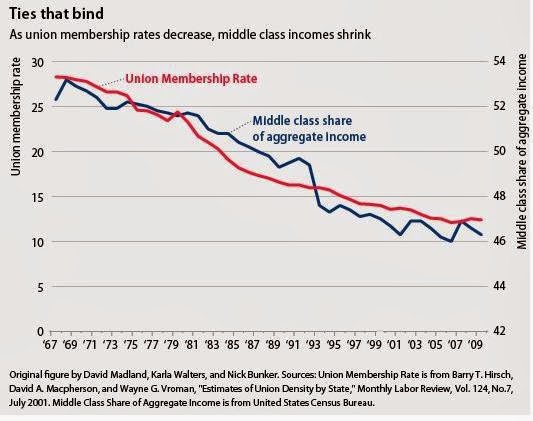