That Much Is True: There Is No Guarantee He's Telling The Truth

On the blog of Roll Call, Stuart Rothenberg so generously concedes "a complete investigation of the (George Washington) bridge fiasco is well-warranted."  But he maintains also

given the governor’s immediate reaction to the personal crisis that has engulfed him, it isn’t too soon to wonder when the accusations and media frenzy crossed the line from inquiry and investigation to political lynching.

I said I initially assumed that Christie had some knowledge of the plan to tie up traffic in Fort Lee that has caused so much outrage. But after the governor’s news conference, in which he was so definitive in his denials — and so dismissive of the charges when they aired initially, even mocking them by saying that he was the person who put the cones out on the road — I changed my mind.

Rothenberg admits "There is no guarantee that Christie is telling the truth."

But the governor’s performance was persuasive. There was no hemming and hawing, no uncomfortable pauses, no sense that he was parsing his words to make sure that he was answering a question without actually answering it.

There is no guarantee that Christie is telling the truth. But the governor's performance was persuasive. Rothenberg was played by Christie, who claimed "I've worked for the last 12 years in public life developing a reputation for honesty and directness and blunt talk, one that I think is well-deserved."

Rothenberg argues "He has developed a reputation for directness and blunt talk."  That has been displayed numerous times, as when he called a law student and former Navy SEAL "idiot" (video below).


But directness and blunt talk are not substitutes for honesty, in which the Governor repeatedly has fallen short.   Nine months ago, The New York Times reported

Gov. Chris Christie of New Jersey exaggerated when he declared that unforeseen costs to the state were forcing him to cancel the new train tunnel planned to relieve congested routes across the Hudson River, according to a long-awaited report by independent Congressional investigators.

The report by the Government Accountability Office, to be released this week, found that while Mr. Christie said that state transportation officials had revised cost estimates for the tunnel to at least $11 billion and potentially more than $14 billion, the range of estimates had in fact remained unchanged in the two years before he announced in 2010 that he was shutting down the project. And state transportation officials, the report says, had said the cost would be no more than $10 billion.

Mr. Christie also misstated New Jersey’s share of the costs: he said the state would pay 70 percent of the project; the report found that New Jersey was paying 14.4 percent. And while the governor said that an agreement with the federal government would require the state to pay all cost overruns, the report found that there was no final agreement, and that the federal government had made several offers to share those costs.

It appears Christie lied- er, uh, "exaggerate" by about 56%.  And then there was the time when

Days after Governor Christie’s administration gave a Florida business a multi-million dollar contract to clean up after superstorm Sandy — a contract that bypassed normal competitive bidding procedures — the company contributed $50,000 to a Republican organization that played a crucial role in the governor’s 2009 run for office.

At least four other companies hired by New Jersey in the wake of Sandy have also opened their checkbooks to the Republican Governors Association, making donations totaling more than $110,000, according to disclosure forms filed with the Internal Revenue Service.

Christie was vice chairman of the association when almost all the companies, including AshBritt — the Florida disaster-recovery firm that’s now drawing scrutiny for its pricing policies and use of politically connected lobbyists — made their donations, the IRS records show.

I don't remember ever meeting Mayor Sokolich in that -- certainly I never did in that context. I don't ever -- I'm sure I met him at some point in an event in Bergen County, but I have to tell you, until I saw his picture last night on television, I wouldn't have been able to pick him out of a lineup.

Oops. The picture below- which ABC News found on the governor's own website- finds Christie about to pick Mayor Sokolich out of a lineup at an event pertaining to sick pay reform. 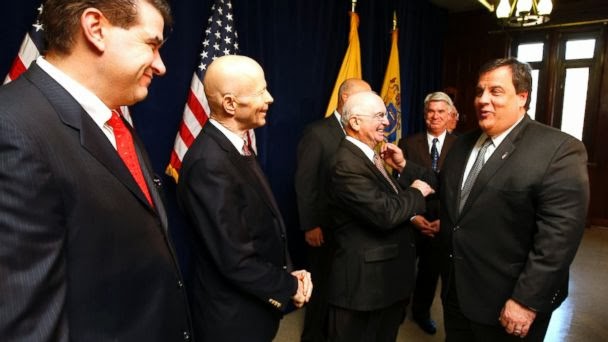 But Rothenberg is at his most noxious when equating scrutiny of Governor Christie to slavery. The New Jersey governor will be slaving away this January weekend- in Florida- at three events, two fundraisers and the other a meeting with major donors. After taking note of Christie's schedule, No More Mister Nice explains

If it doesn't involve conscience-shocking violence or the equivalent in brutality, it's not a lynching -- or a rape or slavery, for that matter. When the person perceived as a victim has power, status, high-powered lawyers, media defenders, and a future that involves due process, and has not suffered grievous physical harm or been summarily deprived of human rights, do not say the person is being raped or lynched or enslaved.

Hyperbole is gratifying, and sometimes entertaining.  But it would have been reasonable for the esteemed Mr. Rothenberg to wait, oh, at least a day into the investigations being launched by the NJ Assembly, the US Attorney's Office, and possibly the US Congress before chalking up to "partisan politics and pettiness"  disruption of transportation on a bridge leading into New York City on days including the anniversary of 9/11.