What has gotten into Harry Reid?

Whatever it is, it should be bottled and forcibly fed to Barack Obama.  Salon's Elias Isquith on Thursday wrote

Democrats think 2014 is shaping up to be a tough year for them politically. So instead of trying to persuade the public that they’ve got the best answers to the problems we face, they try to shut everybody else out of the political process, they try to shut them up,” McConnell said. He went on to accuse the president of wanting “to use the IRS to drive conservatives right off the playing field.”

Reid wasn’t having it, and pointed to the conservative billionaire Koch brothers — who directly and indirectly fund many of these organizations — as a prime example of how the rules are being disregarded or abused by outside political actors. “Because of a United States Supreme Court decisions called Citizens United, there’s been some really untoward stuff going on in the political world,” Reid said. “We have two brothers who are actually trying to buy the country.”

“What they’re doing is spending their … dollars on governors races, and on the state level and, of course, spending huge amounts of money around the country attempting to defeat Democrats both in the House and the Senate,” Reid continued. “The Koch brothers hide all their campaign efforts. They disguise themselves with rare exception as social welfare organizations, with all these fancy names going after people who are trying to improve the country.”

Reid is blowing the whistle on the complex web of organizations (graphic, as well as the passage below, from The Washington Post) funded by the right-wing and horrifyingly mainstream Koch Brothers, whose

But they have substantial firepower. Together, the 17 conservative groups that made up the network raised at least $407 million during the 2012 campaign, according to the analysis of tax returns by The Washington Post and the Center for Responsive Politics, a nonpartisan group that tracks money in politics.

A labyrinth of tax-exempt groups and limited-liability companies helps mask the sources of the money, much of which went to voter mobilization and television ads attacking President Obama and congressional Democrats, according to tax filings and campaign finance reports. 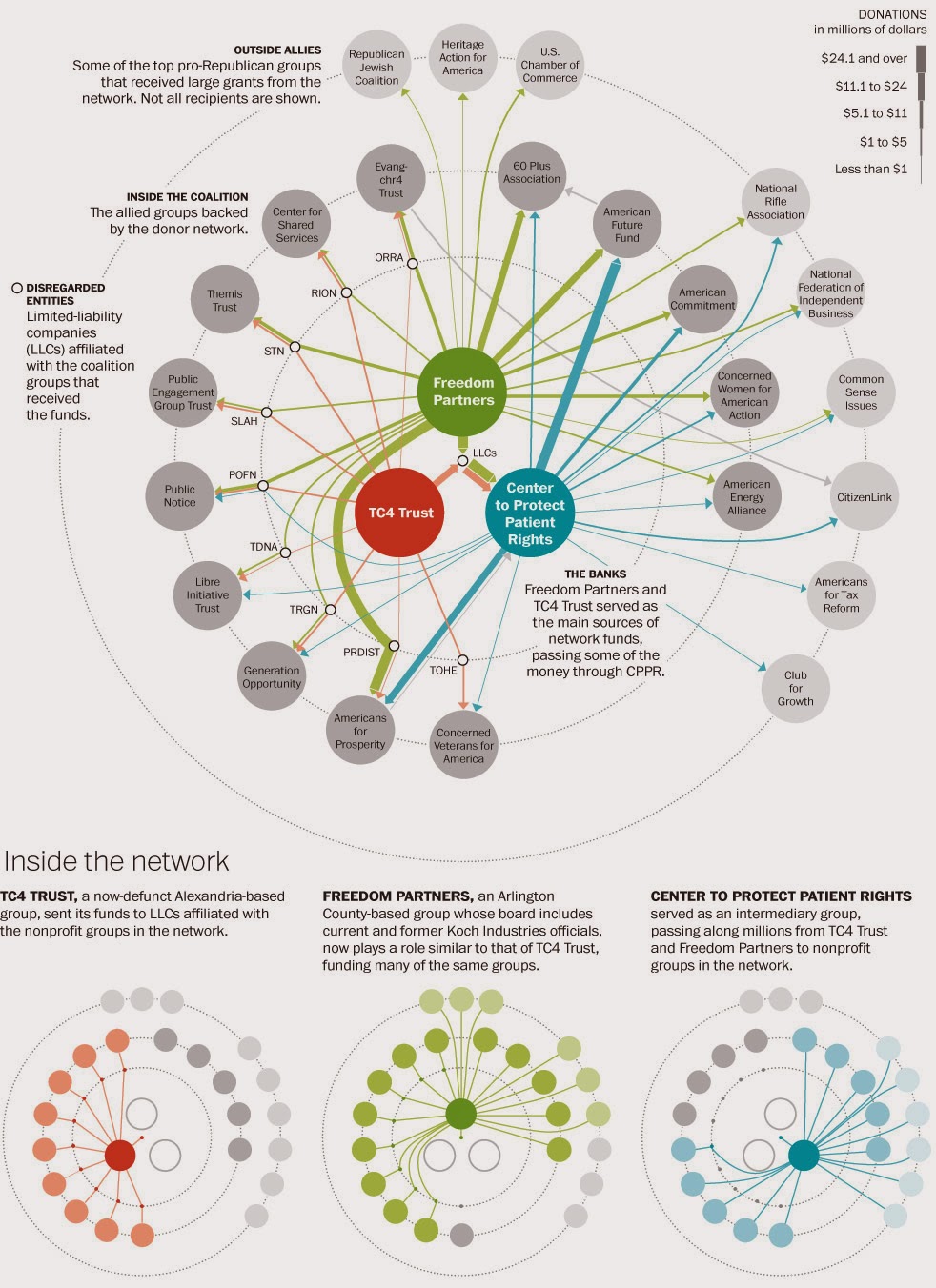 No Democrat- publicly- will defend the Koch brothers, who would like to put every one of them out of business. But the day before, Reid boldly had taken on the President of his own party. The Huffington Post reported

"I'm against fast track," Reid told reporters Wednesday on Capitol Hill, before suggesting a fast-track bill introduced by Sen. Max Baucus (D-Mont.) may not get a vote.

Indeed, Reid cautioned the president and his allies to back off.

"I think everyone would be well advised just to not push this right now," the majority leader said.

Reid may be aware that since passage of the North American Free Trade Agreement, the share of national income captured by the 1% has shot up and real income barely increased as productivity has grown substantially.  Far more corporations than previously have shut down and gone abroad while the threat to do so by many employers has stymied union drives.  The U.S.A. trade deficit- especially with Mexico and Canada, the other parties to the NAFTA- has climbed dramatically.  And much of this has taken place under the nose of the man who as both a candidate and President promised to renegotiate the agreement.

Still, the President isn't satisfied, and at his State of the Union address promoted the Trans-Pacific Trade Partnership, stating

Let’s do more to help the entrepreneurs and small business owners who create most new jobs in America. Over the past five years, my administration has made more loans to small business owners than any other. And when ninety-eight percent of our exporters are small businesses, new trade partnerships with Europe and the Asia-Pacific will help them create more jobs.  We need to work together on tools like bipartisan trade promotion authority to protect our workers, protect our environment, and open new markets to new goods stamped “Made in the USA.”  China and Europe aren’t standing on the sidelines.  Neither should we.

Keith Ellison, chairperson of the Congressional (really, the House) Progressive Caucus,  responded "How can you say on one hand you want to address income inequality, you want to make this economy work for everyone, and on the other hand, say you want trade promotion authority so you can pass these NAFTA-style trade deals? It doesn’t make any sense."

Here are some of the words and phrases that did not appear in President Obama’s speech: “Wall Street,” “bank,” “regulation,” “fraud,” “settlement,” “investigation,” “too big to fail,” and “Glass-Steagall.” He didn’t mention the Consumer Financial Protection Bureau, or the Dodd/Frank financial reform bill. He didn’t discuss the cynical attempts to roll back financial reform in Congress – attempts that are supported by members of both parties – much less insist that those attempts be defeated.

Although the president discussed the economic plight of the majority of Americans, he made no mention of the financial industry’s central role in the devastating 2008 financial crisis, which made that plight so much worse. He talked of wage stagnation, but did not explore the financial industry’s role in the increasingly unjust economic redistribution of recent decades. Inequality doesn’t just happen. It’s produced by many forces, most of which either originate on Wall Street or are heavily influenced by it.

We can’t create a newer, fairer economy without talking about Wall Street. Building that economy begins with preventive measures. The last bank-fueled crisis robbed the nation of millions of jobs and trillions in wealth. Preventing the next crisis means stronger financial regulation, a breakup of the big banks, and rock-solid walls between customers’ money and bankers’ gambling funds.It also means prosecuting the fraudsters who helped perpetrate this crisis, no matter how prominent they may be in the banking community. There’s no sign that those prosecutions are imminent, even as the statute of limitations runs out.

On that score, it’s noteworthy that the president didn’t mention the enormous fines and settlements banks have paid in the past year as the result of the fraudulent behavior. Leaving aside the issue of whether those payments were sufficient, one would think the president might have touted them – if only as a modest first step. But they weren’t mentioned. Even JPMorgan Chase’s record payouts for fraud – $20 billion in a single year – went unremarked.

Some people, most notably the Senate Majority Leader, have been paying attention to what's going on with the American economy  Perhaps if they don't back off, President Obama can evolve on trade and the crimes of the banking industry as he has on the legitimacy of same-sex marriage and the need to raise the minimum wage. But probably not.