Chris Christie Is Not A Bully. Richard Nixon Was Not A Crook.

O'Donnell was not a witch, though years earlier she had  "dabbled into witchcraft."  Richard Nixon, however, was a crook, having dabbled in obstruction of justice to cover up a break-in at the headquarters of the Democratic National Committee in Washington, D.C.   Nixon had been elected twice as a chief executive (President) and Christopher J. Christie also was elected twice as a chief executive, as a governor.

But the similarity doesn't end there. Christie is not a crook (we think) but he is something he claimed at his news conference (transcript, here) on Thursday not to be.   Asked by the Bergen (N.J.) Record's Charlie Stiles about "suspicions that you fostered through your administration or your campaign that allowed people to think it was OK to intimidate or retaliate against people," the New Jersey governor responded

... And listen, it's easy for people to be characterized in public life based upon their personality, and I have a very direct, blunt personality. And I understand why some people would then characterize that, especially people who don't like you, as bullying, but it's not that...

When earlier NBC's Kelly O'Donnell had asked him whether he's a "political bully," Christie had replied

... Some people like that style, some people don't. And I've always -- I think you asked me the question day after the election, are you willing to change your style in order to appeal to a broader audience?


Here is video from summer 2012 on the New Jersey shore of Christie, flanked by his security detail from the New Jersey State Police, not being a bully:

And here (from a tweet by Slate's Dave Weigel) is Chris Christie, a few days before he was re-elected, not being a bully to a teacher who asked him a question at a football game: 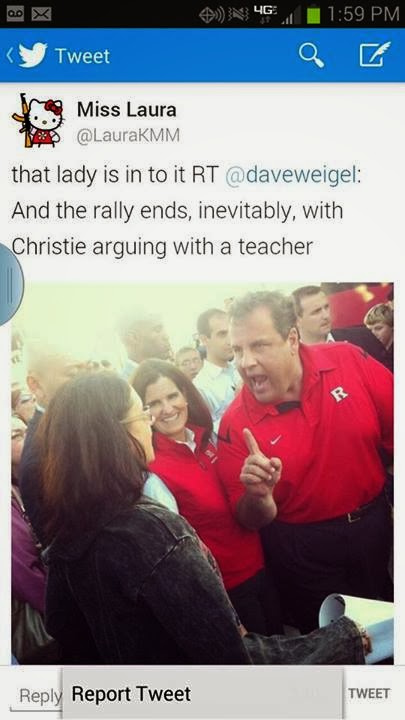 It's not too difficult being a tough guy when you have State Police ready to strong-arm anyone who talks back to the Governor.  And in Washington, the press secretary to one of Chris Christie's best friends, President Obama, says "it all sounds like a state matter to me."   Of course.