It's a growing scam, one which increasingly defines the nation's economy, a cooperation between the public and the private sectors manifested in the growing trend of subcontracting services

While the minimum wage in the state of Washington is $9.19 per hour, it is $10.88 in SeaTac (a municipality of 27,000 residents south of Seattle), where voters in November approved a ballot measure raising it to $15.00 an hour.

Except that for now, it appears they didn't.   Wonkblog's Lydia DePillis explains that recently

in response to a lawsuit backed by the airlines and the restaurant industry, the King County Superior Court ruled that the measure could only apply to the 1,600 people who work at hotels and car services outside the airport. That cuts out 4,700 people who work within the airport itself, which is technically a separate jurisdiction belonging to the Port of Seattle -- not subject to the voters' desires.

The referendum probably would have been challenged in court even if the increase were much smaller than 38%.  A spokesperson for the measure's primary backer stated that the figure of $15 was chosen in part because it was the prevalent wage in 2005 before outsourcing became all the rage. DePillis writes

Working at Sea-Tac wasn't always quite such a hard way to make a living. Just ask Ahmed Jama, 26, who says he started in fast food restaurants there since he was 16.

Like most workers at the airport, he holds multiple jobs, since most employers don't give anybody full-time work (to say nothing of health benefits -- Jama says he declared bankruptcy when he was 20 years old because of medical bills for a heart condition). So for about 30 hours a week, he's a dispatcher for the aviation services firm Huntleigh USA, which means he coordinates dozens of wheelchair pushers who arrive to meet disabled people at their gates. After 10 years, he still makes $10.05 an hour, and feels like he's going backwards -- he wants to go to school to become a medical technician, but working 60 hours a week doesn't leave time for class.

Here's what happened to make planning for the future impossible: The airlines have contracted out more and more of the jobs for which they used to pay people decent salaries with benefits. While Alaska Airlines employees overall make an average of $73,500 per year, those of the airlines' contractors make an estimated $20,176.

"That's the new hustle, subcontract everything. Cut the salary, cut the benefits, and CEO pay goes up," Jama says, taking a break from his spreadsheets and walkie-talkie in SeaTac's airy welcome lobby. "And you see all these companies come underbid each other. So companies that used to pay vacation pay, or parking, a new company will come in and say 'we don't pay anybody anything, give me the contract.' And they'll get the contract, and it's a steep decline in working conditions and morale. Each company is just out doing the bare minimum."

The subcontracting hustle is, admittedly, only one factor driving down wages, though very likely a more significant one than, say, immigration.  But it has contributed markedly to the decline of the middle class, in which, the people at Wonkblog note, in the midst of "a vice of chronic unemployment and falling wages, real median household income (excluding capital gains and losses but including cash government benefits) has declined 4.4% since the "recovery" began in 2009."  The results are illustrated below in the following graph: 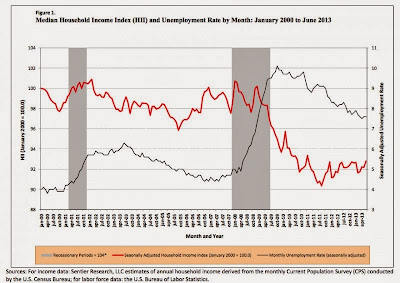 Although this merely continues a trend begun sometime in the 1970s, it reflects "the ineffectiveness of monetary policy to help (Americans) and the desperate need for fiscal leadership to generate real, sustainable growth."   But it points to something less obvious, but at least as critical, in sustaining an economic structure with a stable middle class.

Economists view joblessness as either cyclical, in which unemployment inevitably and periodically goes up and down, and structural, in which worker skills do not match employers' needs (a problem grossly exaggerated in the USA).  But there is a third, in which the quest for ever-growing profits precludes an economic structure which would preclude decent (not even "good"; let's not be greedy) jobs with a modicum of benefits. Privatization, outsourcing, and- as with SeaTac Airport, the subcontracting scam, a symptom of the New American Exceptionalism.