Benjy Sarlin's profile of Brian Schweitzer (photo, below- but you knew that), who has strongly indicated he wants to run for the Democratic nomination for President, is intriguing on several levels.   Although some liberal/progressive Democrats- including at No More Mister Nice- are skeptical that he can (or should) be nominated. there is reason to like the former Montana governor.  One of them is

In August 2009, the president traveled to Montana to deliver a speech touting health care reform. His efforts to transform the health care system were then under siege from the tea party movement, which warned of a European-style “government takeover” of health care and spread myths of federal “death panels” to execute the infirm. So Schweitzer raised a few eyebrows when he introduced Obama by declaring his unabashed love for Canada’s government-run health care program.

“Did you know that, just 300 miles north of here, did you know they offered universal health care 62 years ago?” he said. He praised Tommy Douglas, father of the country’s health program, who, he noted, was named in a TV poll the greatest Canadian in history – nine spots ahead of Wayne Gretzky.

This wasn’t the only source of tension between the two men.

Schweitzer was concerned the emerging legislation would rely too heavily on expanding Medicaid, which he complained could prove too costly for states and give conservative governors room to undermine coverage. He wanted a strong public option, which Obama favored but the Senate would soon jettison to appease wavering Democrats. Schweitzer had campaigned on importing cheaper drugs from Canada (he personally bused seniors across the border to buy medicine) and wanted the government to negotiate lower prices, two policies that the White House rejected to secure alternative savings and pharmaceutical industry support.

After the speeches were over, Obama sat Schweitzer down for a private talk. According to Schweitzer, the president said his voice wasn’t helping the health care debate and asked him to step away. The White House, through a spokeswoman, disputed his account.

Schweitzer said he agreed to to tone down his attacks after their meeting. But he went on to engineer a series of confrontations with the Obama administration that highlighted his critique of the law.

His request for permission to sell drugs at Medicaid prices in Montana was rejected. He tried to get a waiver to turn Medicaid into a single payer system, modeled on Saskatchewan’s, for all Montanans. That idea was rejected, too. But he did build a small network of free clinics for state employees that pay doctors by the hour instead of by the procedure to lower expenses. So far, they’ve gone over pretty well.

It's not surprising that Brian Schweitzer doesn't get along well with Barack Obama; after all, his name isn't Chris Christie.  The President prefers governors who yell at teachers and block Medicaid expansion to those who want a single payer system which, presumably, would contrast extremely well with the Rube Goldberg contraption known as Obamacare.

Citing Schweitzer's traditional opposition to gun control and lukewarm approach to the environment, Sarlin suggests Schweitzer probably is targeting the vice-presidential, rather than presidential, nomination. He notes

On guns, Schweitzer now supports closing loopholes on background checks. But he still opposes an assault weapons ban. While Howard Dean managed to capture the progressive imagination with a matching “A” rating from the NRA, the issue is more emotionally raw in the post-Newtown era, and Schweitzer himself has expressed concern that it might disqualify him from national politics.

Well, yes, it might disqualify him from national politics, though there are other reason(s) he's unlikely to gain the Democrats' nod in 2016 (more on that at a later date. Also, the last post.) And we might be reluctant to ascribe legitimacy to a Schweitzer run because he supports gun rights, though as a politician in Montana, any other stance likely would be disqualifying.

A President Schweitzer might be unwilling to limit the firearm carnage in America. The contrast would be startling, apparently, from a President who in his eulogy at the service for the victims of the massacre in Tucson, Arizona stated only this about the issue:

But at a time when our discourse has become so sharply polarized -- at a time when we are far too eager to lay the blame for all that ails the world at the feet of those who happen to think differently than we do -- it's important for us to pause for a moment and make sure that we're talking with each other in a way that heals, not in a way that wounds.

Scripture tells us that there is evil in the world, and that terrible things happen for reasons that defy human understanding. In the words of Job, "When I looked for light, then came darkness." Bad things happen, and we have to guard against simple explanations in the aftermath.

"Mistakes were made," President Ronald(6) Wilson(6) Reagan(6) said after it was revealed he sent arms to the murderous thugs in Tehran. "Terrible things happen for reasons that defy human understanding," an admirer, Barack Obama, said while he ignored the need to stem violence on America's streets.  Brian Schweitzer of Montana does not understand the need for sensible gun control now, but he may "evolve," as Obama apparently has with same-sex marriage. And after five years after an Obama presidency, we have this list of  firearms safety measures enacted: 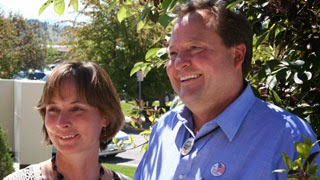