The Revolution Has Been Postponed

It is, as they say, the "takeaway:"  85 people in the world own more than the poorest half of the world's population.

But the briefing paper from Oxfam examines other important trends, such as

Rich people are pulling further away from everyone else in terms of wealth in many countries. The World Top Incomes Database covers 26 countries, with information on the share of pre-tax income going to therichest one percent since the 1980s.  In all but two countries (Colombia and the Netherlands), the share of income of the richest percentile increased – and in Colombia, it stayed at around 20 percent. The richest one percent of people in China, Portugal, and the US have more than doubled their share of national income since 1980, and the situation is getting worse.

The following two graphs (both from Oxfam) indicate, respecively, that the percentage increase in the share of income going to the richest one percent in the USA has risen approximately 140% from 1980 to 2012, and at an even faster rate in the past four years than in the previous twenty-eight. 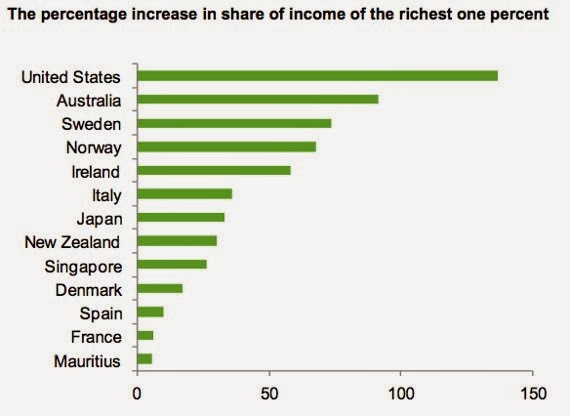 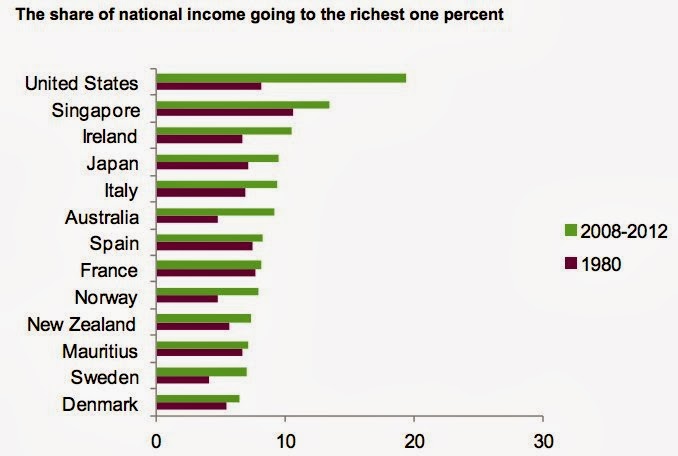 The Oxfam authors, as displayed below, have found a strong correlation between financial deregulation and income share of the top 1%. 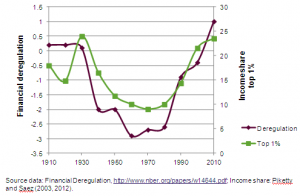 This is of little concern at this year's annual World Economic Forum in Davos, Switzerland, where we read

“It used to be just bankers that were bashed,” the chief executive of a large European consumer goods company said with a sigh after coming out of his morning trance. He spoke on condition of anonymity, perhaps not wanting to seem as if he was complaining. “Now it’s all of us.”

If the Davos crowd wants to keep the current order that has made them so wealthy, they need to work on making it fairer for everyone. That means not just making it easier for a few lucky poor people to become rich, but also vastly improving the lives of all those in the poor and middle class who don't hit the lucky jackpot. Otherwise, sooner or later the current order will be replaced--peacefully or otherwise--with something better that actually provides results.

If only.  Robert Reich identifies three reasons there is no revolution in the USA, why there isn't "more of a ruckus."  As jobs and wages are lost, economic insecurity has grown, resulting in a working class "paralyzed with fear."  With the decline of unions, the major means of workers organizing and protecting themselves has all but disappeared.

Students, Reich recalls, were a major force of social change in decades past but now are laden with debt and face a daunting job market and therefore "don't want to make a ruckus." Further, the American public generally "has become so cynical about government that many no longer think reform is possible" (and no doubt want to steer clear of a "ruckus"),

There are other factors, including a lingering belief in get-rich-quick schemes, now known as "lotteries" and "gambling" (more disingenuously, "gaming").  While some workers believe that, someday, they may get lucky and strike it rich, even more workers buy into the myth, sans adequate wages or benefits, that they are part of a "team."  Author Edward McClelland describes a tour given by retired United Steelworkers official "Oil Can Eddie" Sadlowski in which

In the parking lot of the ironworkers’ hall, I noticed that most of the apprentices were driving brand-new pickup trucks — Dodge Rams with swollen hoods and quarter panels, a young man’s first purchase with jackpot union wages. Meanwhile, I knew college graduates who earned $9.50 an hour as editorial assistants, or worked in bookstores for even less. None seemed interested in forming a union. So I asked Sadlowski why white-collar workers had never embraced the labor movement as avidly as blue-collar workers.

“The white-collar worker has kind of a Bob Cratchit attitude,” he explained. “He feels he’s a half-step below the boss. The boss says, ‘Call me Harry.’ He feels he’s made it. You go to a shoe store, they got six managers. They call everybody a manager, but they pay ’em all shit.”

Sometimes all it takes is a title, as with this fellow: