In his annual war on the "war on Christmas," Fox News' Bill O'Reilly accurately noted Macy's department store promotes Santa Claus as emblematic of the holiday. Then, however, he wrote

What holiday is Santa celebrating? Winter solstice, the birthday of a reindeer -- what? On the national front, there are three primary culprits seeking to diminish Christmas, the American Civil Liberties Union, the Freedom from Religion Foundation and the American Humanist Association. The most aggressive is the Freedom from Religion Foundation, which routinely threatens to sue small towns and school districts if they dare utter the word "Christmas" or allow choirs to sing carols in public schools.

O'Reilly leads the cable network's war on the War on Christmas while some of his colleagues exploit Christianity to cloak an anti-Obama, anti-liberal bias without rational basis, reflecting the perspective of founder and chairman Roger Ailes.

In his highly critical "The Loudest Voice in the Room," Gabriel Sherman describes one of the earliest exchanges between Ailes and fellow Putnam County and Garrison, NY resident Gordon Stewart, revelatory of the (sarcasm alert) tolerance of the the most powerful person in television news:

In 2005, after living many years on the Upper West Side of Manhattan, Stewart and his wife bought a place in Garrison. They looked forward to watching their young adopted daughter run in the backyard and swim in their pool. Stewart often dropped by Pete’s Hometown Grocery on Main Street to pick up a copy of the PCN&R. Reading the articles each week, he did not at first see glaring signs of right-wing agitprop. He especially liked the paper’s tough coverage of a contract dispute at the local school board. Shortly after Stewart gave a quote to the PCN&R criticizing the Garrison school, he bumped into Ailes in Manhattan at lunchtime at Michael’s, a restaurant frequented by media executives. “We gotta get together on this, that school sucks!” Ailes said to him.

“What’s your problem with it?” Stewart said.

“There’s no Christ child on the lawn at Christmastime!” Ailes said. “They have all this fucking Kwanzaa stuff, they have this Hanukkah shit, and you can’t even get Jesus! They think it’s illegal. You can’t show any flags. So I’m not sending our kid there.” As Stewart turned to leave, Ailes told him to stay in touch. “Call me,” he said.

Ailes evidently, colloquially speaking, has had it up to here with Kwanzaa and Hanukah.   Kwanzaa was born not of historical events or theological yearning and thus appears gradually to be passing into oblivion. Alas, he will not be as lucky with Hanukkah.   Asbury Theological Seminary professor Craig S. Keener explained the holiday's connection to Christianity through the latter's raison d'etre, Jesus Christ:

John's Gospel reports Jesus regularly traveling to Jerusalem for Jewish festivals, affirming his Jewish identity and continuity with his heritage. Although this Gospel focuses on major biblical festivals such as Passover (Pesach) and Tabernacles (Sukkot), it also reports that Jesus came to Jerusalem for the Festival of Dedication -- Hanukkah...

although John's interest in festivals is more extensive, the earlier Gospels also report Jesus celebrating Passover. Jesus keeping festivals was not invented by later Gentile Christians, and it is intrinsically likely historically, barring evidence to the contrary, that Jesus did in fact observe the festivals observed by most other Galileans and Judeans. Despite John's theological interest, then, his account may also tell us something about Jesus' practice. Indeed, even the reported setting of Jesus' visit to the temple for Hanukkah fits: winter could be cool in the Judean hill country, including in Jerusalem; thus Jesus was walking in the colonnaded area of Solomon's portico, sheltered from the wind. (Romans destroyed Jerusalem a quarter century before the probable time when John wrote his Gospel, so this setting was not likely an idea simply invented in his own day.)

We might not always agree on the meaning of Jesus' participation in Jewish festivals, but we can agree that Jesus honored these traditions of his people. For Christians, this model should invite an appreciation for Jewish tradition. Jesus offers a bridge between what has historically evolved into two separate faiths, and an opportunity for deeper reconciliation and mutual appreciation.

It's unsurprising that "offering a bridge between what has historically evolved into two separate faiths" is an alien concept to an individual (photo and caption below from Media Matters) who, as someone in the know reportedly remarked, "has a personal paranoia about people who are Muslim -- which is consistent with the ideology of his network."  Nor is it surprising coming from the king of GOP TV.  What I'm doing posting about this topic a month after Christmas and almost two months after Hanukkah, however, is less easily explained. 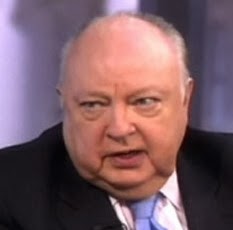 "I've been kicked out of every damn church I"ve belonged to," Zev Chafets quotes Ailes in his admiring, authorized biography.  Chafets writes "It is a buccaneer's boast, meant to convey a hard-core irreverence."