No Victory To Declare


Steve M. recognizes that E.J. Dionne (as is his habit) only means well when he writes

... the new militancy on the Democratic left is a consequence of a slowly building backlash against the skewed nature of our politics. A dramatic manifestation of this sentiment wasNew York City Mayor Bill de Blasio's unabashed attack on inequality in his inaugural address Wednesday....

Discussions about entitlements have revolved almost exclusively around the question of how much to cut them. By contrast, progressives such as Sens. Elizabeth Warren (D-Mass.), Bernie Sanders (I-Vt.) and Sherrod Brown (D-Ohio) say we must begin dealing with a coming retirement crisis fostered by the near disappearance of traditional private pensions....

More generally, the Democratic left is animated by the battle against growing inequality and declining social mobility -- the idea, as Warren has said repeatedly, that "the system is rigged for powerful interests and against working families." ...

Dionne foresees the "re-emergence of the Democratic left," but Steve-O's optimism is far more cautious as he notes

In Dionne's column, the focus is on pols. Last fall's lefty superstar pol, Elizabeth Warren, gets two mentions, and the new star is Bill de Blasio. Did I use the word "celebrity" above? It wasn't chosen idly:

I feel as if I'm living through the optimism -- and personality cult-ism -- of the early days of the Obama presidency, up to and including the transformation of family members into boldface names outside the realm of politics. (Chiara is de Blasio's daughter.) Yes, I know that the celebrification of the Obamas helped them maintain the public's goodwill, and thus helped keep the GOP out of the White House. But it also meant that progressives let their guard down and waited for the superstar pol in the White House to make everything all better. (He didn't, and couldn't have.)

Or perhaps he never wanted to.  The danger of placing faith in individual personalities has been demonstrated by the lackluster performance of President Obama. "Personality cult-ism" is never goodand looms as a major danger, if not quite  and is nearly as likely now as it was in 2008.

Elizabeth Warren, at a conference in Washington in November, stated "I’ve been in the Senate for nearly a year and believe as strongly as ever that the system is rigged for powerful interests and against working families."  Defending the Consumer Financial Protection Bureau- to which she gave birth- she asked “You tell me: When was the last time you heard someone call for regulators to go easier on companies that want to use lead paint on our children’s toys or leave the safety switches off toasters?"

But Elizabeth Warren isn't running for president. Neither is Bill DeBlasio, overheard in his inauguration speech Wednesday declaring "When I said we would take dead aim at the Tale of Two Cities, I meant it. And we will do it," vowing ."New Yorkers (willl) see our city not as the exclusive domain of the One Percent."

Fortunately, if Politico's Ben White and Maggie Haberman have it right

The worry on Wall Street is about how far to the left Clinton might have to drift to appease what’s been proclaimed the “Warren wing of the Democratic Party”—the vocal populists buoyed by Elizabeth Warren’s tough critiques of Wall Street greed, as well as by the recent election of liberal Mayor Bill de Blasio on their New York home turf.

Unfortunately, if they have it right

According to people in Clinton’s extended circle, John Podesta—the former White House chief of staff under her husband who this week joined the Obama White House for a year-long stint—was poised to work with Hillary Clinton on her messaging on income inequality, a role he seems less likely to fill while he's in government. Still, some say fears that Clinton will end up alienating financial sector donors the way Obama has, even if she tacks left, are overblown. “Wall Street folks are so happy about [having Clinton run] that they won’t care what she says,” says one well-placed Democrat.

And if the banking class is delighted with Clinton lately, the feeling appears mutual. In Manhattan last week, Clinton sat down with the Carlyle Group’s David Rubenstein for their second question-and-answer session in the last two months. Unlike the first one, held for his private equity firm’s investor conference, this was a more public appearance, part of a program honoring the late diplomat Richard Holbrooke at the Metropolitan Museum of Art. Clinton easily regaled the well-heeled crowd with stories from her past before Rubenstein ended their half-hour chat with a joke about her future: Would she be interested in joining a private equity firm?

“Is that an offer?” Clinton asked, laughing as the audience knowingly joined in. She may soon need many things from the titans of finance, but a job is probably not one of them.

And they will want much in return from her. White/Haberman remark also

These Wall Street types prize personal relationships and ego stroking as much as they do any laundry list of policy initiatives. When we sought answers about the rift with the White House, many New York sources circled back to this; leaders in the finance industry, as in so many others, want to know they have friends and influence in high places

Somehow- despite record profits amid job cuts- this is "a feeling that’s not been forthcoming from the Obama administration," as reflected in Toles' cartoon (though from four years ago) below: 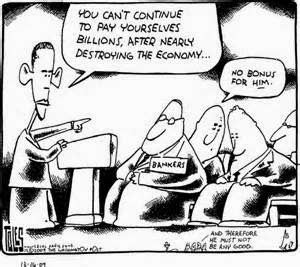 Dionne notes the "resurgent populists," the economic populists in the Democratic Party, "are battling a double standard."  At some point, unless they're willing to lose their soul, they probably will have to battle the party's presumptive presidential nominee, also.