There are both a good reason and a bad reason to live in Utah, and both are reflected in the website of  an organization called Equality Utah, which describes as its mission to "secure equal rights and protections for LGBT Utahns and their families."

How, precisely, does one pronounce "Utahns?"  It certainly doesn't have the same ring as "Minnesotans," "Vermonters," "Texans," or even the loathsome "Jerseyans."   (How about those Yorkers? Or those Hampshirers?)  But in what apparently builds on an ordinance passed in 2008, the county has adopted a registry "for adult residents of the County who share a primary residence and rely on one another as dependents. The measure would help many of our elderly residents, people with adult dependent children, as well as same-sex couples."

This measure is different than, goes beyond, and is superior to adoption of same-sex marriage, though it is not binding on businesses.   Katie McDonough of Salon quotes Lisa Duggan, professor of social and cultural analysis at New York University, maintaining

This is definitely an opening to raise a set of questions about how our personal relationships are recognized by the state.

We need some kinds of recognition for things like health proxies, childcare, child custody and jointly owned property. There are circumstances where we need to have these relationships recognized, but it doesn’t make any sense that rather than recognize the relationships we actually have — whatever they are — that the state only recognizes conjugal couples.

It is, in McDonough's words, "a radical legal alternative to marriage," which is supported by Troy Williams, whom she identifies as "a Salt Lake City-based LGBT activist."

The age of the civil union appears to have been short-lived, in part because it provided concrete (not psychic) benefits as gay activists turned their efforts to striking down DOMA and state laws which prohibit same-sex marriage.  Increasingly made is an argument premised on blind faith in the institution of marriage which by design follows the traditional and misguided notion that marriage is inevitable, inviolate, and the only legitimate principle around which to organize human relationships.

Erroneously, snark-prone supporters of same-sex marriage often have emphasized that gay marriage cannot harm traditional marriage, already accomplished by heterosexual couples (a point made in the cartoon below, from Pat Bagley of the Salt Lake Tribune).. Motivated by a desire for gays to participate in the august custom of marriage, they have implied that gay marriage will be more stable than traditional marriages and will manifest the stability the others haven't.  However, McDonough (a supporter of same-sex marriage but clearly not captive to political correctness) notes, "if we are going to push for a more expansive kind of legal recognition for families and households, we need to decenter marriage."

That would be a risky strategy for supporters of same-sex marriage, whose success in the court of public opinion lately has been advanced by the plea that they want gay couples to enjoy the same benefits (especially psychological) enjoyed by heterosexual couples. Still, it would be an honest one, wherein "cultivating those networks" in which "multiple kinds of people" play a major role in our lives "should be our goal," Williams recognizes. And Salt Lake County, Utah is pointing the way toward establishing laws and institutions which do little for marriage, but strengthen families and other vital social relationships. 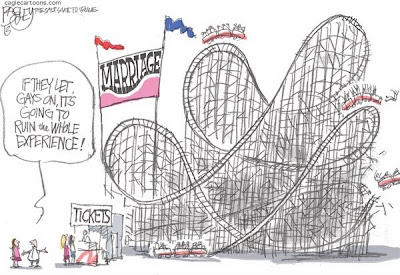