Taking A Flyer, Or Not.

That could be a baby or a sexual act, but in this case it is  S1881,  an attempt of some United States Senators to kill the baby in the crib.

Section 301 of the Nuclear Weapon-Free Iran Act of 2013, sponsored by Democrat Robert Menendez of New Jersey and Republican Mark Kirk of Illinois, clearly is aimed at sabotaging P5+1 negotiators in their effort to stem Iran's uranium enrichment program.  Jeffrey Goldberg of The Atlantic and Bloomberg News, who describes himself as "someone with hawkish views about the Iranian nuclear program," believes the "impetus" behind the legislation is "Additional sanctions might soon prove to be necessary during these negotiations, if the Iranians resist the demands of Western interlocutors to dismantle important components of their nuclear program."

Goldberg maintains, further, "there is a high likelihood that the negotiations that will soon commence in Geneva will not succeed."  He notes "Iranian leaders say they will quit talks if additional sanctions are enacted. I don't quite believe that- the regime has agreed to negotiations not because it wants to give up its nuclear ambitions, but because it needs sanctions relief in order to revive its economy. It will be difficult for Iran to quit these negotiations entirely."  Still

at least in the short term, negotiations remain the best way to stop Iran from crossing the nuclear threshold. And U.S. President Barack Obama cannot be hamstrung in discussions by a group of senators who will pay no price for causing the collapse of negotiations between Iran and the P5 + 1, the five permanent members of the security council, plus Germany. “You have a large group of senators who are completely discounting the views of the administration, the actual negotiators, the rest of the P5 + 1, the intelligence community and almost every Iran analyst on earth,” said Colin Kahl, who, as a deputy assistant secretary of defense for the Middle East during Obama’s first term, was responsible for preparing all of the options that the President says are still on the table.

And that isn't all.  Goldberg explains

precipitous Senate action will embolden Tehran’s hardliners, buttressing their “Great Satan” narrative. Kahl said that Iran's President Hassan Rouhani and Foreign Minister Mohammad Javad Zarif would find themselves in a corner: “Even if the talks don’t collapse, Rouhani and Zarif will have to bargain and negotiate with even more toughness because they will have to defend themselves against hardliners who will argue that they got suckered.”

It seems like just yesterday that foreign policy analysts, pundits, and politicians, were raising the specter of a nuclear-armed regime in Tehran largely because of Iranian President Mahmoud Ahmadinejad.   The name of Ahmadinejad, who advocated the replacement of Israel with a Palestinian state, became nearly synonymous with his most wish that the Jewish state be "wiped off the map."

But Iranian presidents are term-limited and three candidates stood for election to the position. Shortly before the vote, the Guardian (from which the photograph below is taken) described the eventual- and unexpected- 65 year old winner Hassan Rouhani as

the only cleric among the eight candidates, but (who) is seen as a pro-reform moderate figure expected to win the support of the country's reformers. He is a former chief Iranian nuclear negotiator who served as the secretary of Iran's supreme national security council for 16 years. Under the former president Mohammad Khatami's presidency, Rouhani was responsible for negotiating with the west over Tehran's nuclear dossier. Under Rouhani, Iran halted its enrichment of uranium and showed more cooperation with the inspectors of the International Atomic Energy Organisation. He is keen to transform Iran's damaged relations with the west. 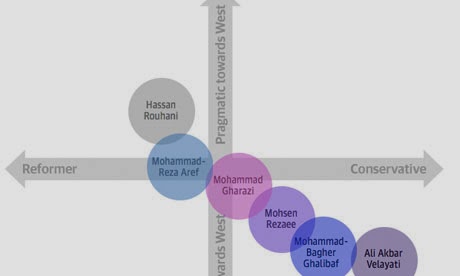 Rouhani, whose campaign slogan had been "moderation and wisdom," promptly set as a priority a deal on Iran's nuclear program.   And The Nation reported that this month

in close coordination with the P5+1 and the International Atomic Energy Agency, Iran will begin concrete implementation of the November 24 accord. That is when Tehran will freeze its stockpiles of low-enriched, fuel-grade uranium, halt the installation of new centrifuges and refrain from using any of its already installed advanced units, begin to neutralize its medium-enriched uranium by converting it into a form unsuitable for further refinement, freeze development on its heavy-water reactor in the town of Arak, and accept stepped-up, more intrusive daily inspections of its entire program.

As Goldberg posits, no lasting, viable agreement is probable.  But the bill pushed by the Senate extemists would make a settlement less, and war more, likely.

Email ThisBlogThis!Share to TwitterShare to FacebookShare to Pinterest
Labels: Iran